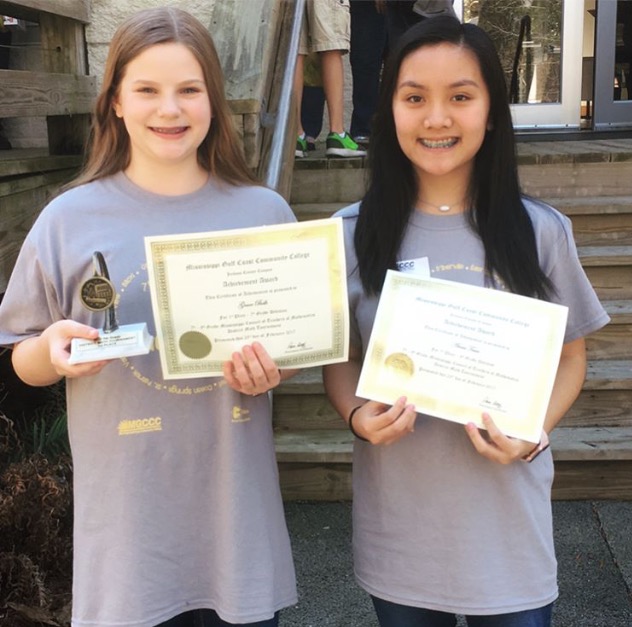 On Thursday, February 23, Mrs Williams took students from St. Patrick Catholic High School to the MCTM Math Tournament. This tournament took place at MGCCC, and 11 schools attended. The schools that went were Ocean Springs, St. Patrick, Vancleave, Bayou View, Biloxi, Calmer, D’Iberville, East Central, Gautier, Long Beach, and North Woolmarket. From each school, two 7th graders and two 8th graders were selected to participate and compete. From St. Patrick 7th graders, Grace Belk and Scarlett Nation were selected. 8th graders, Braleigh Moak and Anna Tran were also selected. This was a great opportunity for the young students to utilize their knowledge in a competitive tournament, but to have fun while doing so. Each person that participated in the tournament was awarded with a door prize, so this made the day more enjoyable. Braleigh Moak says, “I had an a great time at the math tournament. I really did enjoy it, and the campus was really nice. I liked that everyone won a door prize, even if you did not place.”

During the tournament, each student took a test, and the top two highest scores from each grade advanced forward. After all the students had tested and been scored, the winners were announced. We did really well, because two of our students placed. From St. Patrick, Anna Tran won 7th and Grace Belk won 1st. Their hard work definitely paid off! The students did a great in representing St. Patrick! Congratulations to Anna and Grace for placing in the District Math Tournament.