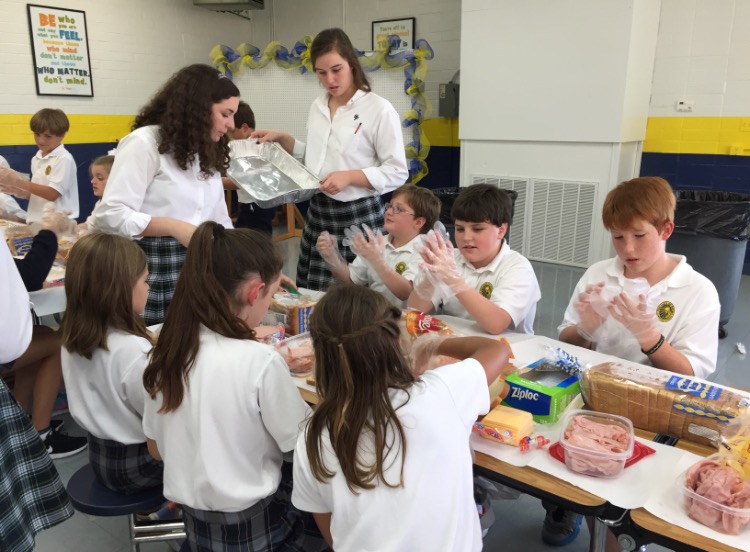 On Wednesday, September 14, Key Club officers and Big Buddies officers traveled to Our Lady of Fatima Catholic Church in Biloxi to prepare sandwiches for the homeless. The officers left St. Patrick during seventh period and teamed up with Our Lady of Fatima sixth graders at the elementary school cafeteria.

When the officers entered the lunchroom of Monica Hall, the sixth graders were waiting patiently for them. They sat with one another and assembled simple sandwiches of bread, ham, and cheese. Snacks were added to the bags along with beverages and condiments to dress the sandwiches. The meal was simple and easy to make, but it was the time the students gave that mattered the most. The volunteers felt humbled to be able to help the local homeless people in their diocese and to do the Lord’s work.

Taylor Smith, Key Club president said, “Making sandwiches was better than just giving a donation. It was more of a donation of time, and sometimes time is much more valuable than money.” After putting together the meals, some sixth grade students asked the St. Patrick students about high school and what St. Patrick was like. Sarah Pleasant, President of Big Buddies said, “It was nice to be able to answer their curious questions. I felt like a good role model to them and hoped that they saw our emphasis on community service.” Thank you to Big Buddies and Key Club officers for serving our community and exemplifying Christ’s love to the less fortunate.