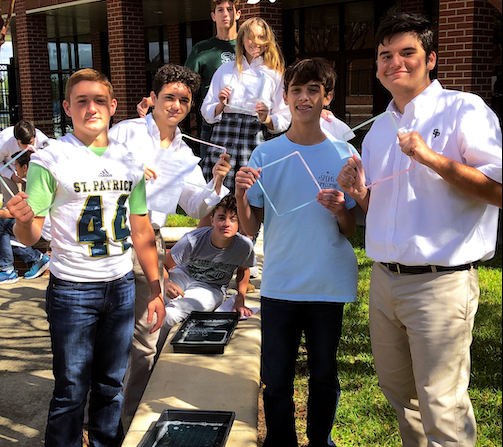 Bubbles make a great stand in for cell membranes. They’re fluid, flexible, and can self-repair. Bubbles and cell membranes are alike because their partsare so similar. If you could zoom down on a cellmembrane, you’d see that much of the membrane is a double layer of little molecules called phospholipids. Phospholipids have a love-hate relationship with water. One end, the “head,” is attracted to water, and the other end, the “tail,” is repelled by water. Place phospholipids in water and they quickly form adouble layer with the heads facing out on both sides.

A soap molecule has the same split personality. The “head” of a soap molecule is charged (ionic) and attracts to water molecules, which have regions of positive and negative charge (polar). The hydrocarbon tail of the soap molecule is not charged and is repelled by water’s polarity. This explains why we use soap to clean. The hydrocarbon tail of soap mixes with and dissolves in other hydrocarbons, like oils and fats, while the head region grabs a hold of passing water molecules andfollows them down the drain. The surface of a bubble has three layers. The middle layer is a thinfilm of water. On both sides of this film is a layer of soap molecules with hydrophilic heads oriented toward the water film and hydrophobic tails pointing away.

Students were tasked with creating bubble fames from straws and string, dipping the frames into a soapy solution. Six concepts were then discussed based on their observations of the film, including:

Each student then performed their own analysis of each concept. Photos of the lab can be viewed below.