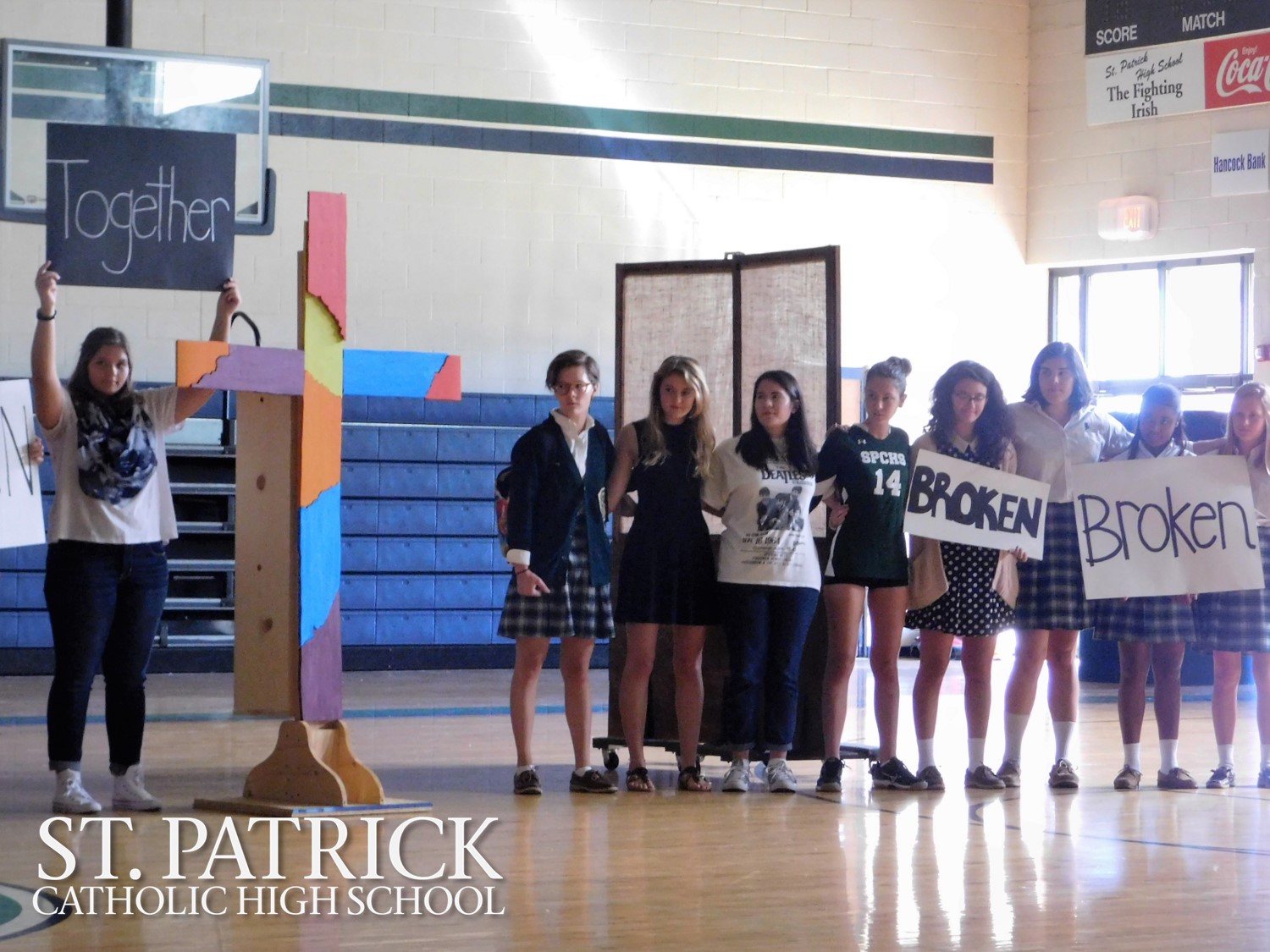 On Thursday, the new Campus Ministry team of St. Patrick Catholic High School announced their groundbreaking theme for the school year.  The theme of this year is Broken Together, the point being that we all have problems and things we go through, but we can hold each other up as a community and a school.  This theme introduction touched the students, and it also left an impression and great precedent for the rest of the school year to support each other and pay it forward.

The presentation started with an icebreaker between all the grades coordinated and set up by the twenty-four seniors who came together to create this year’s Campus Ministry Team.  A student from each grade and a selected teacher all stood by a table and participated in the challenge of putting a puzzle together; the thing they didn’t realize though was that the puzzle was a picture of them.  As they pieced the puzzle together, the participants laughed as the realization that they were looking at their own reflection dawned on them.

After the icebreaker, the mood quickly turned to a serious and hushed tone.  A video was played that showed various problems that teenagers face every day.  There were seven different segments that each included a problem like depression, divorce, and bullying.  After each one of these videos played, the word broken was pieced together on the screen.  The Campus Ministry team had positioned themselves at seven different stations around the gym as the video played.  They all froze in place, representing each one of the problems shown in the short film.  As the video ended, the stations started coming to life.

The first station was a party scene where a girl is roped into drinking and trying to forget whatever problems she may have.  After seeing this, a figure walks up and picks her up, hugs her, and supports her.  The figure also helps the girl carry a broken piece of wood, symbolizing a broken piece of herself that she’s been holding inside. The figure and the girl hugged, and then the now revived girl went on her way to the next station that came to life.  She then helped another lost and broken person in his or her situation, creating a chain reaction.  Each person carried their broken piece until it was finally taken from them, freeing themselves of their struggle.  Then after a dramatic scene of a girl contemplating suicide and then being saved and comforted, all of the members gathered together in front of a screen.  They all had signs that each said broken.  As the screen was pulled away, all of the broken pieces collected by the broken souls were pieced together to create a cross.  The students all stood together, broken each in their own ways but supporting each other and realizing that Jesus and God will support them all in this unity of being broken together.

Campus Ministry Member JR Riojas then explained to the school why the team chose this theme and what the whole point was.  He explained how they want this year’s Campus Ministry to be real with the student body and to create a network of togetherness, everyone holding each other up and helping with whatever crosses the students stumble while carrying every day.  Riojas commented on the theme and speech, “As a team we chose our theme because we realize that there is brokenness in all of our lives, and there are some we can’t control.  If we have each other’s backs though as a school, it will ensure the elimination of some of these problems that we all face.”

At the end of the presentation, the whole school then joined hands and said a prayer for all of the unique and difficult struggles everyone is going through.  We also prayed for the strength to overcome them and continue to be kind to everyone.  This theme will continue to make a large impact on St. Patrick Catholic High School throughout the year, and it will continue to make a difference in everyone’s lives for years to come.

< Click here to see more photos from the event.