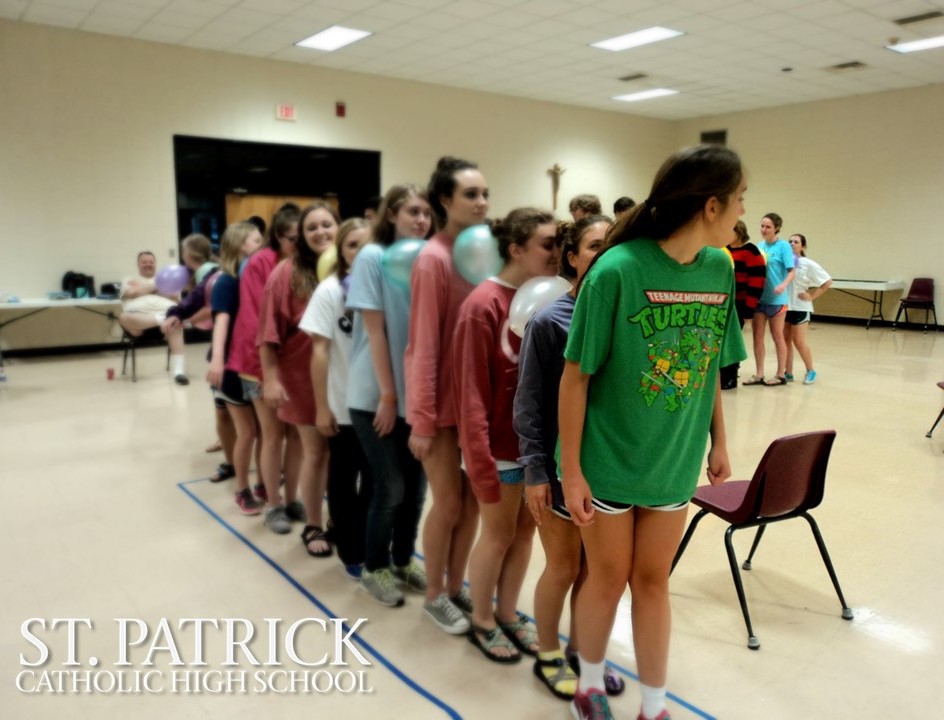 They began their journey to grow closer to each other and to God by going to 11:30 a.m. Mass at Our Lady of Fatima.  They then went to lunch together at Yuki’s with Ms. Previto, Mr. Creel, Ms. Wilkinson, Mr. Buckley, and Mrs. McDaniel.  It was after lunch that the retreat really began.

Once the team gathered in the parish center behind Our Lady of Fatima church they began the team building exercises.  The campus ministers worked on building the confidence of each other and the confidence of himself of herself.  After each member’s confidence was built up they could then begin to build their teamwork.  Throughout the day they had to overcome a set of obstacles set up by Ms. Previto, Mr. Creel, and Mrs. Cloud.  Each task required communication, forward thinking, and physical closeness.

In the evening, the Campus Ministry Team gathered in the chapel of the St. Vincent de Paul building to listen to a talk by Chad Sullivan.  After the talk, the team stayed in the chapel for adoration, and team members were able to go to confession.  After adoration and reconciliation, the team ate pizza and were asked to open up to each other to his or her comfort level.  The next day, the team ate breakfast together and performed a few more team building exercises.  Eventually, the retreat came to an end, and it was time for everyone to head home.

Now that the Campus Ministry Team retreat is over, the team is planning the seventh grade retreat.  The team is comprised of a total of twenty-six seniors that were chosen at the end of last school year by a board of St. Patrick administration and faculty.  Each team member had to submit an application and attend an interview to be considered for a spot on the team.

The next St. Patrick retreat is the seventh grade retreat on Wednesday, October 7.  Eighth through twelfth graders will attend a retreat for their grade later in the school year.