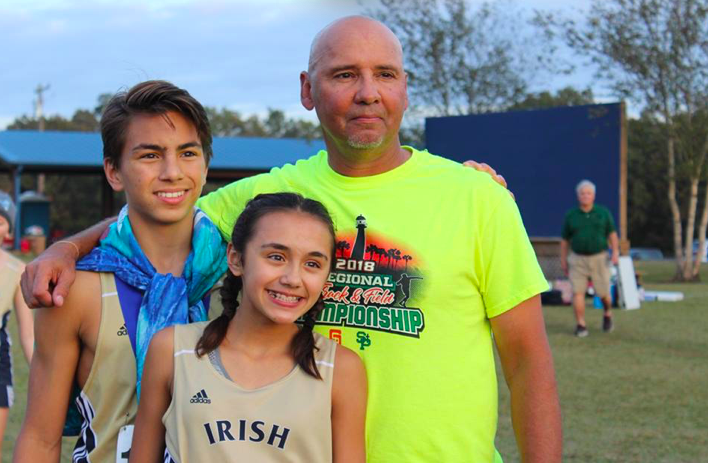 Congratulations to SPCHS Cross Country Head Coach Tim McDaniel for being named the U.S. Track & Field and Cross Country Coaches Association (USTFCCCA) High School Coach of the Year for Mississippi! One boys coach and one girls coach from each of the 50 states and the District of Columbia were honored for their successes during the fall of 2018, as selected by a committee of experts from around the nation. Coach Tim received the award for coaching the Varsity Women’s Cross Country Team to a state championship season in 2018!

On winning the award, he says, “I accept this award on behalf of the St. Patrick community that makes this honor even remotely possible. The administration that allows this sport to flourish with flexibility of practice sessions, Coaches Bryan Leatherman, Greg Patino, and Erin Rosetti who sacrifice their time, parents of athletes whose loyalty and support for this sport is unmatched, and lastly the athletes who carve out part of their summers and fall to achieve a goal bigger than themselves….a high school state championship.”

“This award validates that the St. Patrick Cross Country program is one of the best in the state. To consistently achieve that level of success is not only a result of great student-athletes but also a result of great coaching. It was only a matter of time before Coach Tim McDaniel was recognized for his contributions to not only St. Patrick but also to the sport of Cross Country on a national level. The reason Coach Tim McDaniel has been successful is because he works tirelessly to prepare the students to win a state championship.  Practices are conducted in environments similar to those at Choctaw Trails [where the state competition takes place], and strategy is developed and implemented based on what they expect to see at the state championship. I am confident that our students know who they have to beat and by what margins before they ever arrive in Clinton. It is because of this relentless preparation that our student-athletes remain, year in and year out, a state championship contender. Another trait that all successful coaches share is a passion for the game and their athletes. Coach McDaniel is no exception to this and I have no doubt that Coach McDaniel is revered and respected by anyone whom he comes in contact with.” – SPCHS Athletic Director Eddie Burger

The athletes who train with Coach Tim have expressed excitement for the recognition. Isabel Leatherman, SPCHS sophomore and Varsity Women’s Cross Country Team member, shares what she has learned from Coach Tim and how the sport has changed her outlook.

“The biggest lesson that I have learned from Coach Tim is the benefit of hard work. I learned that the best way to achieve success is to work hard and give my complete effort. I have learned to keep on going, even when nobody else does or when times get difficult. One of my favorite things that Coach Tim is that we can learn alot about life from running. Things will get hard and difficult, but if we push through and work hard, it will pay off, and we will achieve what we set our minds to. Often pushing through these times is what separates us from the rest.

In ninth grade, I had a stress fracture that took a long time to recover from. Even though the injury had happened a year ago and I had been running for some time, I had still had a hard time with my confidence in my running and giving my all during races. At one particular meet, I actually stopped and walked during the last mile. Instead of being angry towards me, Coach Tim was encouraging. He told me to trust all of the training that I had been doing. He told me that he knew that I had the potential to be my greatest, and this was something that I could work through and improve on. Because of this encouragement, I started trying to stay mentally stronger during practices and races, and I improved greatly.” – 2018 MHSAA 2-A Cross Country State Champion Isabel Leatherman

SPCHS Senior and Varsity Women’s Cross Country Team Captain Amelie Million said, “The biggest lesson I’ve learned from Coach Tim is to stop looking for excuses. I can only remember one time that Coach Tim has ever cancelled practice in the six years I have been running for him. Rain or shine, we always run. This is what makes him so successful as a coach. He never finds excuses to prevent him from doing what he knows needs to be done. Two years ago, during track season, there was one particular night where it was raining and very cold. To make matters worse, the lights in the stadium were out, so it was also pitch dark. Instead of cancelling practice, Coach Tim and a few of the parents pulled their cars up next to the stadium and shined their headlights onto the track. This practice has stayed with me for a very long time. Coach Tim’s refusal to cancel practice taught me how to never look for an excuse not to do what’s necessary. One Coach Tim-ism that I’ll always remember is when he says ‘You’ve worked your way up to your last one.’ He says this when we have an interval workout and we’re about to start on the final interval. When he says this, I always feel accomplished, as he’s reminding us that we’ve made it through most of the workout, so we make it through just one more.”