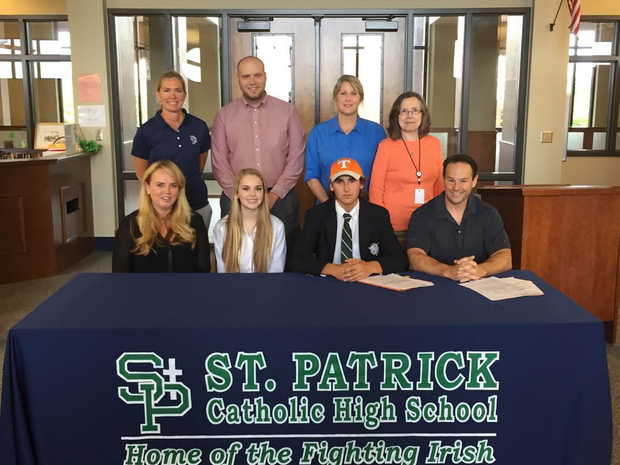 One of the country’s elite pole vaulters has made his college decision.

Del Vescovo is a third-generation SEC athlete in his family, following in the footsteps of his grandfather and father who played football at Mississippi State and LSU respectively.

“It was a big decision between LSU and Tennessee, but Tennessee just seems like a better place for me,” he said. “I think I made the right decision. It took a lot of thinking.”

The 6-foot-1 pole vaulter said he thought he may follow in his family’s footsteps on the gridiron until in seventh grade a former St. Patrick coach introduced him to pole vaulting. Competing in a unique sport like pole vaulting, Del Vescovo said, is unlike anything else.

“The pole completely bends and you can feel whenever you catch it correctly and swing upside down and go up,” he said. “You don’t feel the fall at all. Everybody thinks you’d feel the fall but you’re not thinking about that at all.

“It’s a good feeling when you hit it correctly.”

Del Vescovo was almost immediately hooked on the sport back in seventh grade and in January he finished second in the Millrose Games in New York with a jump of 16 feet, 4.75 inches to solidify his position as one of the top prep pole vaulters in the country.

With more hard work he said he hopes to continue to grow while in Knoxville, Tenn.