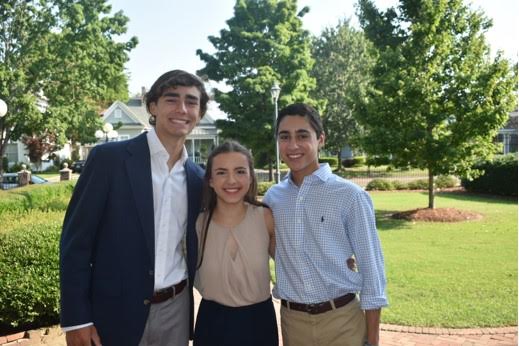 MGS is designed to provide academic, creative and leadership experiences for a select number of rising high school juniors and seniors who have demonstrated exceptional ability and achievement in their studies and who show high intellectual, creative, and leadership potential. Each summer, MGS brings together high potential learners from across the state of Mississippi for a two-week residential collegiate experience that blends cultural, academic, social, and recreational components into a rich and natural learning environment.

One feature that distinguishes the governor’s school model from traditional models of learning is the emphasis on the interaction between formal and informal learning which often results in more autonomous and self-reflective learners.

On how he plans to implement what he learned at MGS, Clayton Stoddard said, “The experiences I had meeting new people and seeing how others in our state think will be very productive when it comes to understanding my peers at school and in my community.” Teal Salloum also plans to implement some of the tactics he learned during the program. He said, “While attending MGS I learned the importance of teamwork. I know this is a little cheesy, but teamwork really does make the dream work. Every team needs a good leader and followers to follow the leader’s example. At St. Patrick, I can implement my newfound knowledge on how to make any team a success!”

Emma added, “During my time at MGS, we did a service project called Project Ukraine. We cleaned out buckets, took off their labels, and made sure they were in the best condition possible. We did this because these buckets would be sent to villages that had limited water sources. In the end, we had cleaned enough buckets to impact more then 20,000 lives. That was definitely an eye-opening experience, and I hope to start service projects in our community similar to that.”

The program includes several thought-provoking activities and opportunities. On the most impactful portion of the program, Teal said, “The most eye-opening activity of the program was an all day event called “Journey to Pele.”  In this activity we were placed into our color groups. While in these groups, we were faced with numerous challenges that we were only able to overcome when we worked together as a team. This really reinforced the importance of teamwork!”

Finally, on their favorite part of the experience, Teal said, “My favorite part about MGS was being able to work well with others that I had never met before. When I first arrived everyone, felt like a stranger. Toward the end of the program, it felt like we had known each other for longer than just a brief two weeks. It was cool to see our development as friends throughout the week. This really showed in all of the group activities we did. I am glad that I had the opportunity to go to Mississippi Governor’s School!”