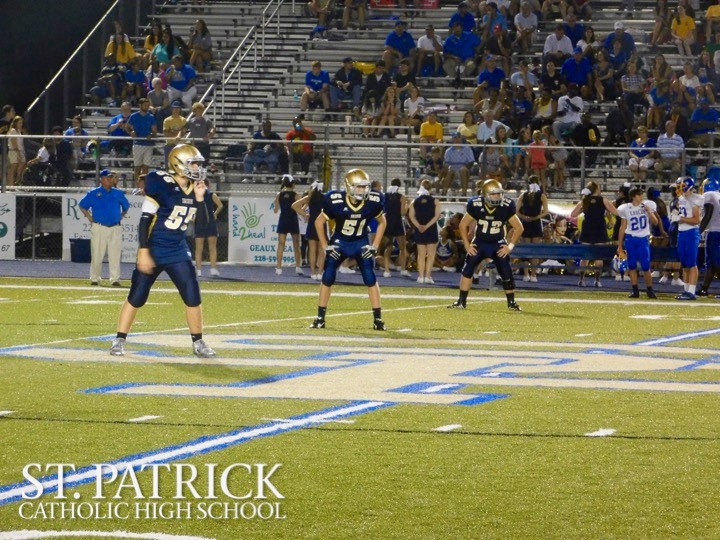 On Friday, August 21, the first official football game of the season took place at St. Patrick Catholic High School.  The game was against the Eagles of Resurrection High School in Pascagoula.  The Fighting Irish football team fought hard, but the game unfortunately ended in a loss, but being the first football game, we have all season to fight for victory!

Students, parents, and teachers excitedly entered the gates to the St. Patrick Catholic High Stadium on Friday night.  Everyone wanted to show off his or her school spirit at the first football game of the season.  The game against the Resurrection Eagles was set to start at 7:00 p.m., but was delayed due to weather.  The rain was pouring down with the players pumping each other up in the field house and all the students and spectators huddling under awnings anticipating the game.  The game started after a forty minute delay after the rain started to ease off.

The student section was packed with eager fans showing their support for the team.  Some students painted the word Irish and jersey numbers on their backs, made up cheers, and exhibited their awesome school spirit.  Jeanne Torp, one of the students attending the game, stated, “I’m really excited about the game because I can’t wait to see how our football team and our new coach does this year!”

The game started off with Resurrection in the lead.  The first quarter had the Irish behind by thirteen points with still no points scored.  In the second quarter, the Fighting Irish scored an impressive touchdown bringing the score to seven for the Irish and thirteen for Resurrection.  The rest of the game showed the Fighting Irish playing their hearts out, but some of our players suffered injuries, and we unfortunately lost with the score finishing at seven for the Irish and fifty-six for the Eagles.  Ryan Hymel, a sophomore member of the team, comments, “I think we can be better by getting bigger in the weight room and just playing better football.  I think we will definitely improve.”  The Fighting Irish Football Team still has an amazing season ahead in which they can solidify victories for St. Patrick!

Click here to view more pictures from the game.