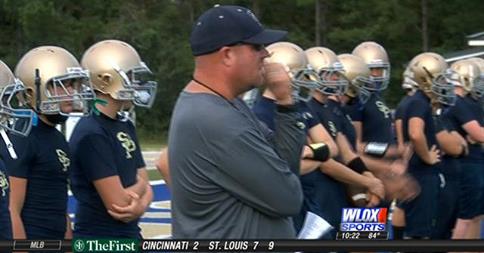 The 2013 season opener for the St. Patrick Fighting Irish at the home of the Presbyterian Christian Bobcats turned into a 41-0 rout in favor of the hosts. St. Patrick then lost their following games by scores of 35-0 and 42-3.

“With the seniors, we only had five last year,” Thompson said. “We have over double that this year and I think the biggest thing is more leadership. Whether it’s in the locker room, on the sideline [or] on the field. That’s probably the biggest part.”

“We just have a lot more experience this year,” senior offensive lineman and linebacker Josh Luke said. “Last year, we were a really inexperienced team and we had a new coach. I think this year we’re just a lot more confident team and we have a bigger senior class. I think that’s really all that it’s going to come down to.”

The Fighting Irish don’t have one distinct weapon that will give them the edge. Instead, they’re relying on all their offensive talent to turn things around after a 1-9 record from a year ago.

“Last year was a tough year because we were a small team and we pretty much had to play both ways,” Luke said. “As far as positive things go, we ran the ball pretty well but we couldn’t quite execute. This year we have a big senior class and we have a lot of potential.”

The man in charge of the St. Patrick huddle now is senior Jacob Seicshnaydre. The Irish averaged just 7.5 points per game last season, so his leadership will be key if the offense has any kind of turnaround. St. Patrick’s only win in 2013 was by a score of 10-0 over West Lincoln in the fourth game of the season.

“It’s really a great sense of responsibility because now I’m holding the reigns to the offense,” Seicshnaydre said. “We’re feeling a lot more confident about it this year. We have a great core of receivers and running backs. Our offensive line is bigger than usual so we should be able to make things happen more on the offensive side of the ball.”

Jacob’s younger brother, Luke, will handle the kicking responsibilities this year as a freshman. At Wednesday’s practice, Luke was seen converting a 40-yard field goal with plenty of room to spare.

“He came over from the soccer team and he’s doing a heck of a job for us thus far,” Thompson said. “He’s been great. Hopefully we can put him in a position to score some points.”

Thompson also said that the younger Seicshnaydre has made 45-yard field goals in practice, but since he’s only a freshman, he has a more consistent kicking game when he’s booting footballs from around 35 yards out.

The young kicker’s first opportunity might come Thursday against Presbyterian Christian, which is a team that finished 2013 with an 8-5 record and earned a playoff berth.

“They have a couple running backs who I think last year gained a lot of yards on us,” Thompson said. “We’ve been trying to prepare for that. They run some Wing-T, a couple two-back sets and some I-formation. They like to play action. We’re just trying to mimick that with our scout offense and we’ll see what happens.”

Kickoff at St. Patrick High School between the Fighting Irish and Bobcats is set for 7 p.m.