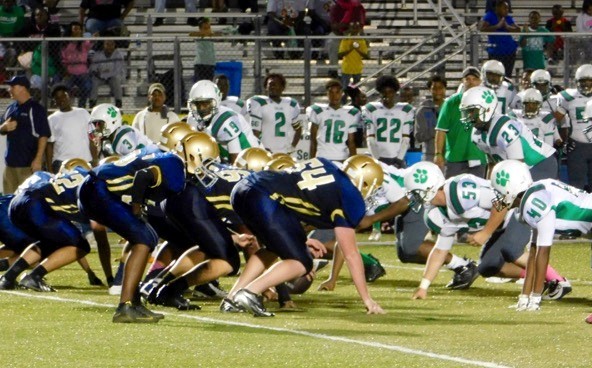 St. Patrick Catholic High School held the second to last home football game of the season on Friday, October 23.  The opponent was the tigers from Collins High School.  The game was hard fought by the fighting Irish and there were some great plays, but Collins ended with a win of fifty to zero.

Fans came out to the stadium on Friday night to support their fighting Irish football team.  Before the start of the game, all the fans were asked to walk out onto the field and form a tunnel for the determined Irish football players.  The team ran through the sign as the fans all cheered them on, creating a great start to the game.

In the first quarter of the game, the Tigers made a touchdown bringing the score to six to zero.  Then there was a two-point conversion attempt, but this was successfully stopped by sophomore, Ryan Hymel.  The first half continued with the tigers steadily increasing the score to thirty-eight to zero.  One of the highlights of the first half and game was a very impressive save by Matt Jones.  The ball was passed to Jones and was almost intercepted by the tigers, the ball bouncing off one of the Collins player’s hands.  After this near interception Jones then caught the ball anyway and started running down the field

The second half of the game continued with some more impressive plays by the fighting Irish and the game ended with a score of fifty-two to zero, the tigers consolidating the win.  Senior football player Addison Falls comments on the game saying, “It was a fun game, the defense and kick returns were good.  Collins players also showed good sportsmanship, it was one of the most fun games of the year.  At the end of the day we enjoyed ourselves and didn’t give up, so it felt like we won without actually winning.”

The fighting Irish fans also support the team, win or lose.  Marina Cole says,” The school spirit and support for the football team by the student body is better this year than ever.  The team also seems much more united this year so it’s more fun to go to the games and cheer them on.”

Come out and support the fighting Irish next Friday for their last home game of the season!