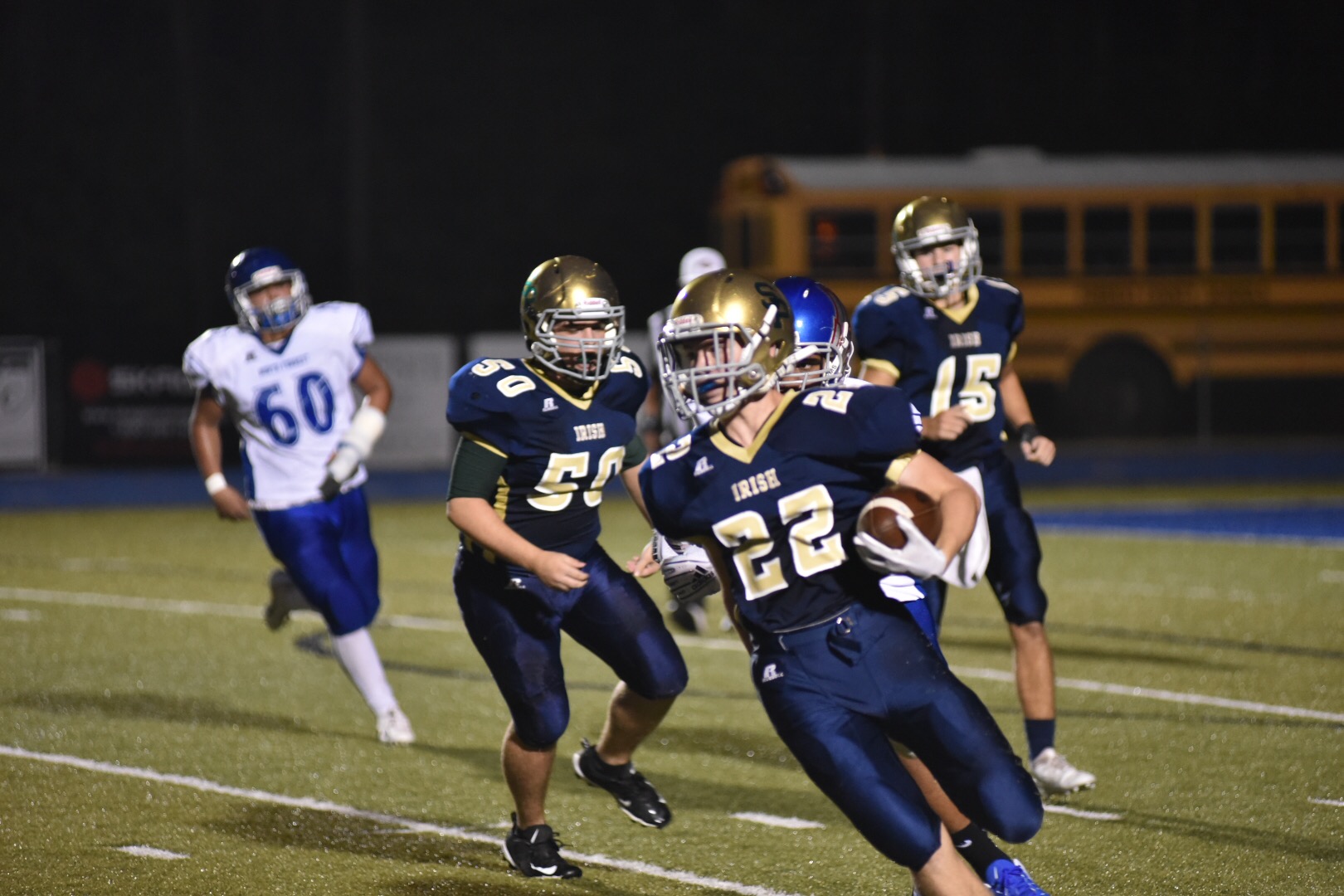 Friday night football was not kind to the Irish as they faced off against the North Forrest Eagles in their first district game. The game began under gloomy skies that reflected the most prominent mood, a mood of hopefulness, but a more realistic sense of despair. The beginning minutes opened with a slogging back and forth battle that consisted of very few gains and many turnovers. The Irish defense held back the horde of Eagles until the five minute mark, when the Eagles scored their the first touchdown of the game. A successful field goal attempt made the score 0-7 in favor of the Eagles. The Irish came back at the 43 yard line and SrDrick Taylor, surrounded by a mob of both teams, attempted to run the ball. This valiant attempt was unsuccessful and the Eagles gained possession of the ball. The Eagles scored their second touchdown in the last seconds of the first quarter.

The second quarter led to a fumble in the first few seconds. North Forrest worked their way down the field and scored a touchdown, further raising their score to 20 points. However, a glimmer of hope appeared with three minutes to go in the second quarter. The Eagles were poised to score a fourth touchdown with a runner seemingly unguarded racing 70 yards toward the end zone. The moan from the Irish stands slowly transformed into a cheer as Bricen Rivers sprinted after the runaway player. Rivers successfully tackled the player on the one yard line. Unfortunately, this hopeful moment did not last as the Eagles still scored. But the Irish were not so easily defeated. River’s lion-hearted effort served as an inspiration for the entire team, who rallied their courage as they rumbled into the third quarter.

It was one brilliant play after another for the Irish. From a fake punt by Presley Harrison that resulted in a 20 yard gain, to the recovery of an onside kick, the Irish pulled out all the stops in their attempt to attain victory. While their efforts did not result in a victory, two magnificent touchdowns by Presley Harrison and Bricen Rivers slightly evened the score to 14-31.

Fighting Irish Athletic Director Eddie Burger said, “There’s something to be said for those who are resilient; men who can come back from losing. We trailed in the beginning, but I was proud of how they came back in the second half. I think the road ahead is going to be hard, but we are going to get better, and with these guys, the sky’s the limit.”

That sky continues to rise as the Irish prove that they are resilient, and they will come back, as they have shown in this season. Their next game is away against Richton High School on October 5. Be sure to turn up and cheer on your Fighting Irish!