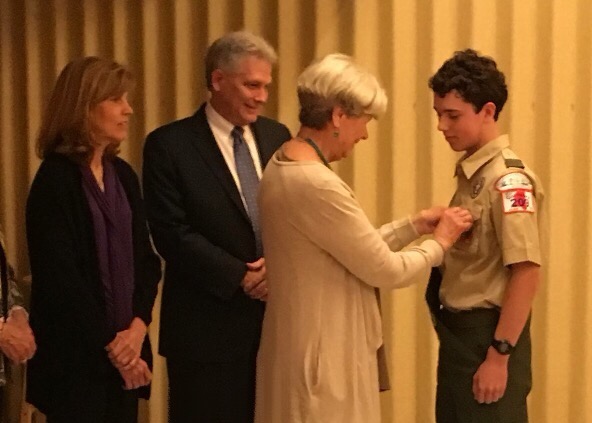 Sophomore, Tyler Fulmer, has attained the Boy Scouting’s highest rank, Eagle Scout and was recently recognized at his Boy Scout Eagle Court of Honor on March 1 at Westminster Presbyterian Church in Gulfport.

Tyler started Boy Scouts in April 2011 and is part of Troop 209.  Tyler stated that becoming an Eagle Scout takes, “a really long time of work and years of waiting.” Tyler worked toward his Eagle Scout rank for five years.

The path to Eagle is difficult, to say the least.  Nationally about six percent of all Boy Scouts achieve the rank of Eagle Scout.  To become an Eagle, a Scout must earn at least twenty-one merit badges and complete a community, school, or church-related service project.  This service project is lead by the scout, testing his ability to be a leader.

For Tyler’s service project he decided to give back to his school, specifically the robotics team in which he is a member.  Tyler built a pathway, attached lattice, and pressure washed the robotics building on campus.  He also plans to add stripes to the sides of the trailer.

Tyler has decided to continue his scouting career and joined the Order of the Arrow, the scouting’s national honor society in the spring and became a member on March 5.  Tyler stated that the goal in the order is to provide service to the council he serves.  Tyler was also able to attend the National Order of the Arrow Conference (NOAC) in August of 2015.  It was the order’s one hundredth anniversary at Michigan State University and was a week-long event that included training and the opportunity to meet other “arrowmen” from across the country.

Congratulations Tyler on this significant achievement, and thank you for making such a positive difference at St. Patrick!