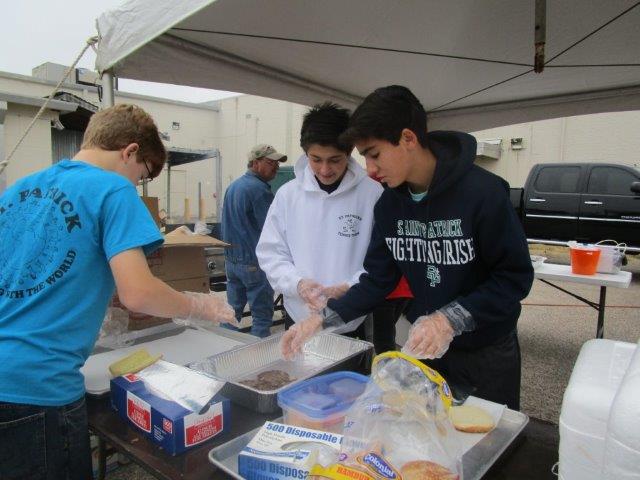 The Interact Club members walked and volunteered at the American Heart Association Heart Walk on Saturday, October 3. The 2015 Gulf Coast Heart Walk was held at the Biloxi Shuckers Baseball Stadium. The walk is organized annually to raise awareness for multiple heart and cardiovascular diseases. Two heart diseases are in the top five killers of the nation’s population. Cardiovascular diseases are number one and strokes are number five.

This year walkers marched a total of 3.1 miles per person as a fundraiser for the American Heart Association and awareness for all the diseases they work to prevent. This year’s total goal is $510,000 and of that, $261,211 has been raised throughout the nation as of Monday, October 5. The American Heart Association (AHA) invented Heart Walks all around the country to promote physical activity and introduce to many a way to keep one’s heart healthy in an atmosphere that is practical, free, and fun for people of all ages and backgrounds.

This past Sunday the Interact Club also participated in the Cruisin’ the Coast festivities by having a booth where they sold drinks and candy. The students also assisted in the wrapping of hamburgers and other delicious food items. Cruisin’ the Coast is a Gulf Coast wide event where classic cars are driven and shown to the public.

The event has attracted over 7,500 cars from over forty-three states. The location of the Interact Club’s setup was in Hardy Court, which is located on the corner of Courthouse Road and Pass Road. Food, drinks, and cars were the main attractions at this event and many people showed out for the event despite the sixty-one degree weather. The Interact Club is a youth organization of the Rotary International organization and is open to all students at St. Patrick.

The motto of the Interact Club is “service above self.” Ms. Mary Lawson is the sponsor of the high school Interact Club, for students in 9th grade all the way up to 12th grade. Ms. Lawson said in an interview that “St. Patrick has been involved with Cruisin’ the Coast since the opening of the school.” The profit made by the booth goes to the Edgewater Rotary Club and the money goes into community scholarships. Four St. Patrick seniors are awarded scholarships from the Edgewater Rotary at the end of the year.

< Click here to see more pictures from this weekend’s events.