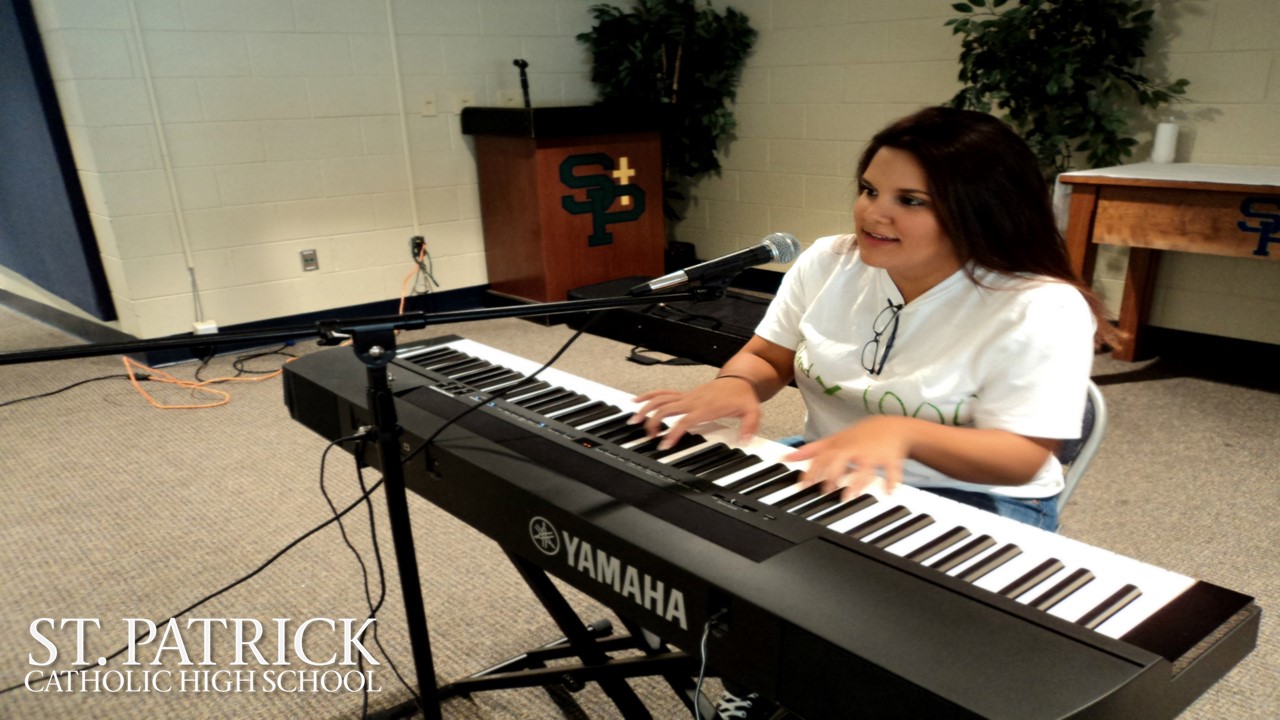 St. Patrick Catholic High School students gathered in the school cafeteria on Tuesday, September 22, to watch their fellow classmates perform in the annual Irish Idol.  Fourteen students performed in the event put on by high school student council and hosted by JR Riojas and Rachel Ryan.

Irish Idol has become an intrinsic part of St. Patrick’s homecoming week.  This year was without a shadow of a doubt the best Irish Idol in the school’s history.  The event had a strong opening with the Irish Idol emcees, JR Riojas and Rachel Ryan, welcoming everyone and introducing the first performer, Mary Claire Rackley.  Mary Claire sang the song “Here” by Alessia Cara which she played on piano.  Charles Fink received a standing ovation for his dancing to the song “Cotton Eye Joe” by the Rednex.  Hannah Horn took the stage and sang the song “Burning House” by Cam.  Jordan Pete displayed her talent as not only a singer but also a writer by performing a song she wrote herself.

The event was kicked into high gear once seventh grader, Abbie Colledge, stepped on to the stage.  Her phenomenal performance of “Blown Away” by Carrie Underwood blew the St. Patrick student body away.  After she finished to a standing ovation, cheers could be heard asking for an encore.  Sam Hewes, Eiland Stebly, and JR Riojas created a boy band they call, “The Sweet Peas,” and they lip synched the *NSYNC 2000 instant classic “Bye Bye Bye.”  Energy radiating from the audience would make one believe that the real *NSYNC was giving a concert in the St. Patrick cafeteria.  Their stage presence and interaction with the crowd was unmatched.

The final performance of Irish Idol was by John David Burkhart, Jennifer Barnes, Nathan Marsland, Joann Pates, Carina Malouff, and Riley Stone.  They sang “School Block Tango,” their own parody of the song “Cell Block Tango” from the Tony Award winning Broadway musical Chicago.  They rewrote the lyrics to the song to playfully poke fun at six St. Patrick teachers.  Each quip the group made left the students, parents, and teacher laughing out loud.

Giggles and cheers were always present between each performance of Irish Idol because of the fantastic work of Ramsey Wagner and Anna Claire Colson.  The two girls entertained the audience by displaying a talent of their own.  Ramsey rode a unicycle around the cafeteria with Anna Claire following her lead on a scooter.

With the success of this year’s Irish Idol, the St. Patrick student body is excited for the next one.  There are numerous fun school events before the next Irish Idol.  Make sure to stay up to date on school events to join in on the fun!