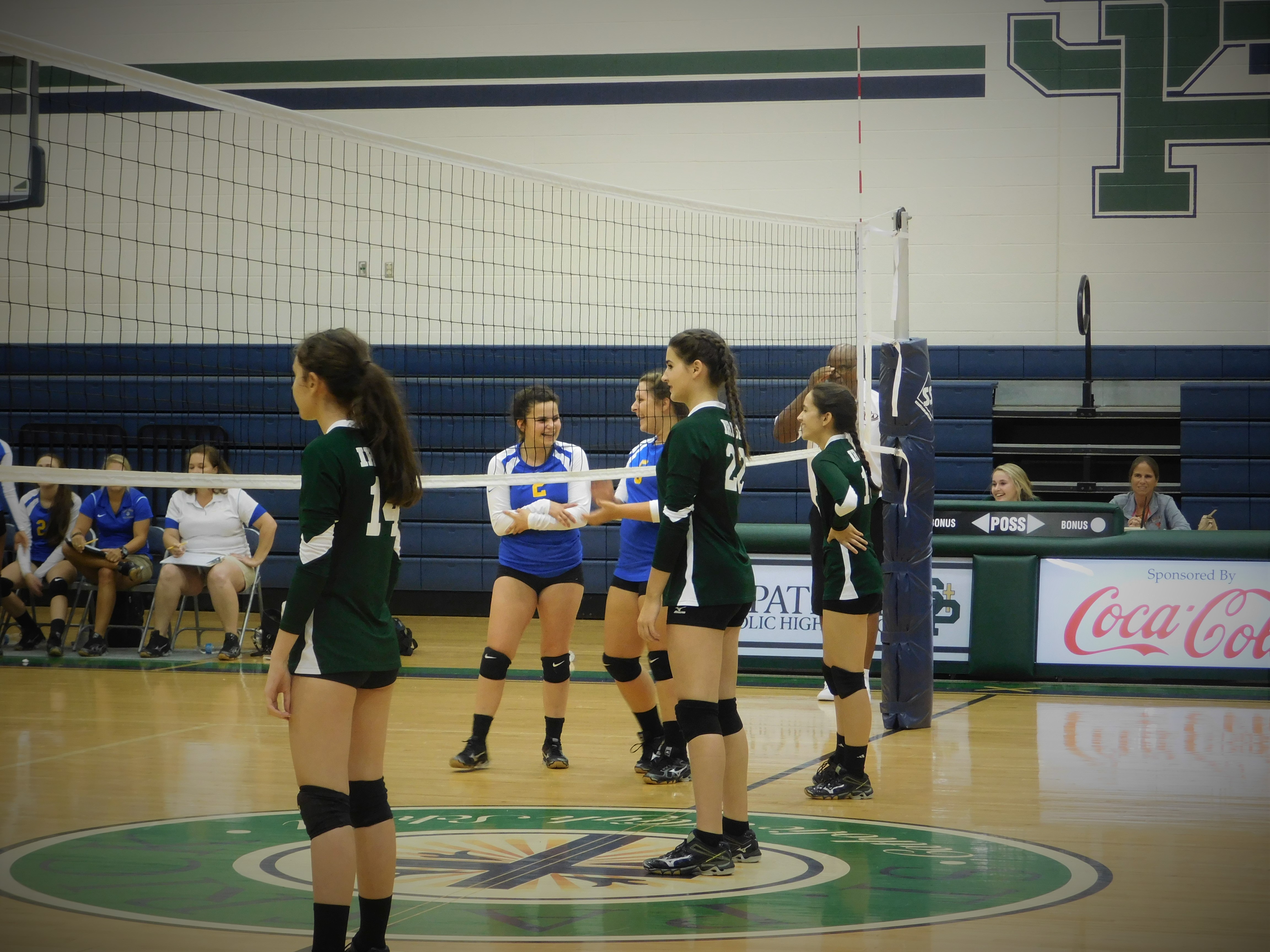 The St. Patrick Fighting Irish volleyball team had their first exciting and competitive home game of the season on Tuesday, August 16.  The girls played against the varsity and junior varsity teams of Bay High.  The game was challenging, and the teams were well matched.  The Lady Irish, playing four games, lost the first one, won the second, and then continued with two more losses.  The games were extremely close with just a couple of points separating the battling teams.

The junior varsity team kicked off the night with some nail biting rallies.  There were lots of high passes and some impressive saves by the girls.  The Fighting Irish pulled out a win in the first match, the score coming to 25 for the Irish and 17 for Bay High.  The next game included some aces by the Irish, but even though it was hard fought Bay High won the match with a score of 25 to 11.  The third game was the tie breaker, and the entire gym was mesmerized by what was happening on the court.  In the beginning, the game is point to point with both teams sliding all over the court to dig flying balls. The game ended with a close score of 11 to 15 favoring Bay High.

The varsity game began at six thirty with a lot of excited and determined expressions exhibited by the Fighting Irish athletes.  A few new people have joined the varsity team, and many of them have new and unique skills.  Rosalyn Lindsey, Mary Beth Tubb, and Shannon Kirkpatrick all returned to the varsity team as veterans showing the competitors and the fans their seasoned skill.  The referee blew the whistle and the match began.  The teams matched each other point for point in the beginning of the game. Then some points were gained by Rosalyn Lindsey with her unreturnable serves and also Raven and Hannah with some powerful aces or spikes.  The Irish take the lead, but then fall short in the very last stretch of the match ending with a score of 21 to 24.  The second game was also eventful with some great dives to the floor to save soaring balls.  The end of the game had everyone on the edge of their seats with the Irish down a couple of points.  The Irish soon brought the score up high to a tie of 24 points for each.  The Irish scored a couple more points with some incredible plays and solidified a victory!

The next two games were losses for the Fighting Irish, but the margin of points between winning and losing was only three or four for both games.  The Irish will continue to improve and show their passion for the game of volleyball throughout the season. Shannon Kirkpatrick, a junior on the team, stated, “We’ve worked hard this summer and the past few weeks.  Tremendous progress had been made, and it really shows through on the court.  We all mesh well together, and I believe we have a great and successful season to look forward to!”  Come support the Fighting Irish as this exciting volleyball season continues!