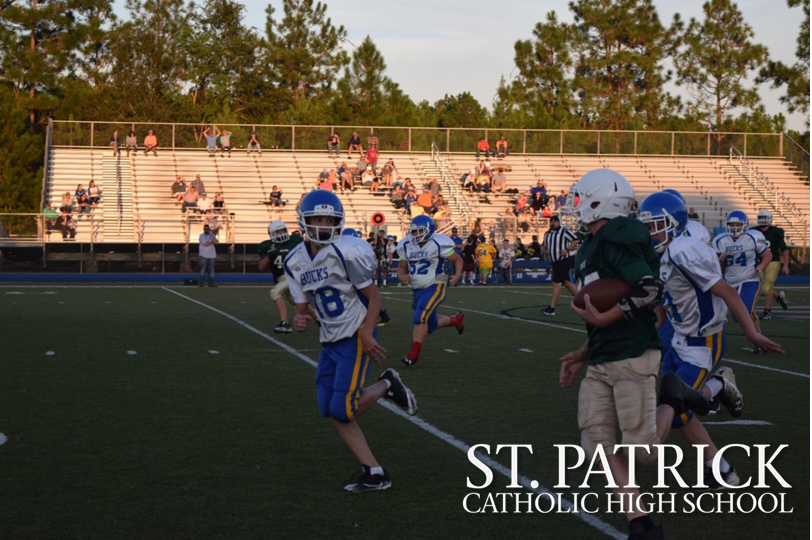 The Fighting Irish junior high football team fought a hard game and gained a well-deserved win advancing to have a 3 and 0 record for this season after gaining victory during the team’s home opener.  The Irish beat the Sand Hill Bucks 38 to 8.

Kaleb Chatman helped lead the team to victory by throwing two touchdown passes and rushing for a touchdown as well.  Chatman joined with SrDrick Taylor and Charlie Olson for the passing touchdowns. Taylor had a rushing touchdown, as well as, Blake Bratton scoring a touchdown on the interception adding to the score board for the Irish.

Eighth-grade player, Blake Bratton, puts it into a great perspective of how the game went.   “It was a great game and very well fought.  We had great plays both on the offense and on the defense.  They had a great team, but we were better.”  Bratton puts it together perfectly for what it is like to be a part of the junior high football program

The junior high cheer squad did a great job cheering on the team and keeping the crowd excited throughout the entirety of the game.

It is really great to see such a strong program being developed, after last Friday night’s varsity football team’s victory against Mount Olive.  The Fighting Irish football program is looking strong and has a bright future on the horizon.

The Fighting Irish junior high football team will face off at home next Thursday against McClain at 6:00 p.m.