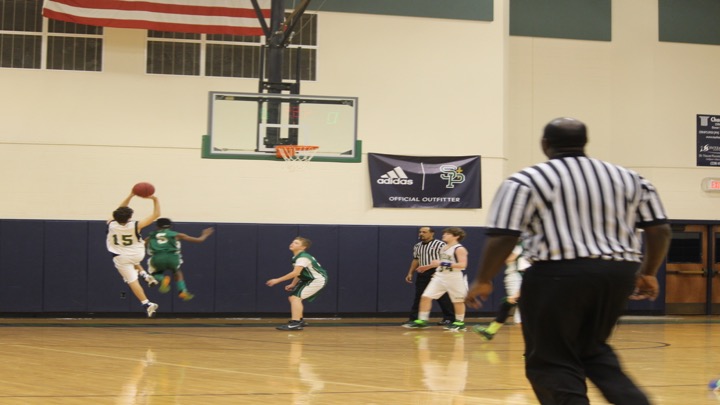 On Monday, January 12, fans filled the gym to support all four St. Patrick Junior High basketball teams as they competed against West Wortham.

The first game of the night started at 4:30 and was played by girls’ seventh grade team, led by Coach Ruffin. The girls’ faced hard competition and fought hard, but the game ended in an 18 to 25 loss.  The girls’ still have a fantastic winning record of 8-3 for this season.

The second game was played by the boys’ seventh grade team at 5:30. The team fought hard, and had a very exciting game that captured the attention of the crowed, but ended in a 32 to 41 loss. Overall, the boys played a great game.

The eighth grade girls’ played at 6 and were coached by Coach Ruffin.  Emilee Nolte made the teams’ first three points by making three consecutive free throws.  The team fought hard and played a great game against West Wortham, but ended the game with a 14 to 31 loss.  When asked about the game, Gabby Patino stated “It wasn’t our best game, but it showed us that we can’t always win.  It has also motivated us to come back and try and beat them.  We are hoping to work better as a team and not give up, even if we are loosing badly.”

The last game was played by the eighth grade boys.  When asked about his teams’ performance Tyler Gerretse stated “We lost because of our execution of plays and lack of coverage.  But as far as I’m concerned, that was by far the best game that the eighth grade boys’ have played all season.”  The boys played a fantastic game and improved a lot, but suffered a 34 to 22 loss.