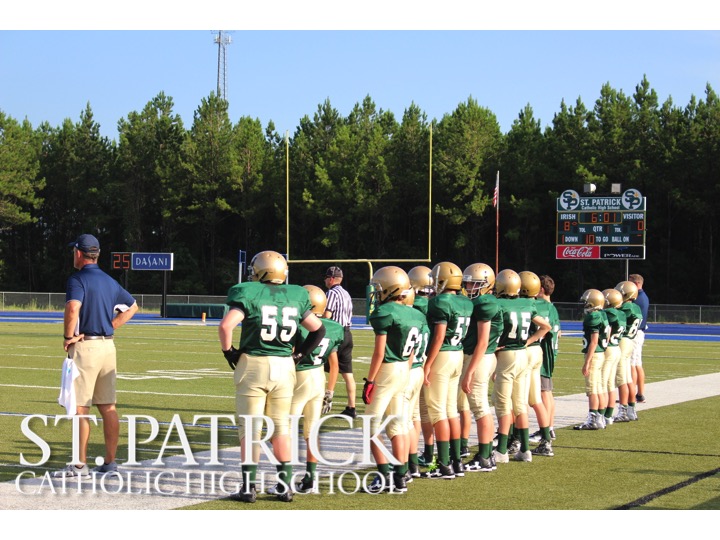 On Thursday, August 25, the St. Patrick Fighting Irish football team played against Resurrection.  Together, the boys make a great team with a driven spirit to win.  In the game against the Eagles, the boys came together and gave it their 100% effort! They played a great game and had lots of support from the cheerleaders on the sideline.  The junior high squad cheers for the team every game to give them motivation and encouragement.  Their loud cheering certainly gets the crowd exited and promotes the football team. The crowd was interested in the game.  It was awesome to see so many people that came to watch the junior high team.  Many students and staff members were there as well to share school spirit and encouragement.

These boys practice continuously after school to make sure they are ready to go for game days.  Since practice makes perfect, the team practices quite frequently!  Their practice definitely showed in the game because, the boys won with an outstanding score. Irish, 38, and Eagles 6. In the first three minutes of the game, the Irish scored the first touchdown of the season.  Their hard work and determination paid off!  Team work and effort play big roles in this sport.  The opposing team put up a good fight, but St. Patrick managed to fight back harder and have a successful win.  The team continued to fight through the game no matter what happened and performed their best. Congratulations goes out to the boys for a great fight with an outstanding ending! Great job on winning the game! Win or lose, the team sticks together and never gives up.