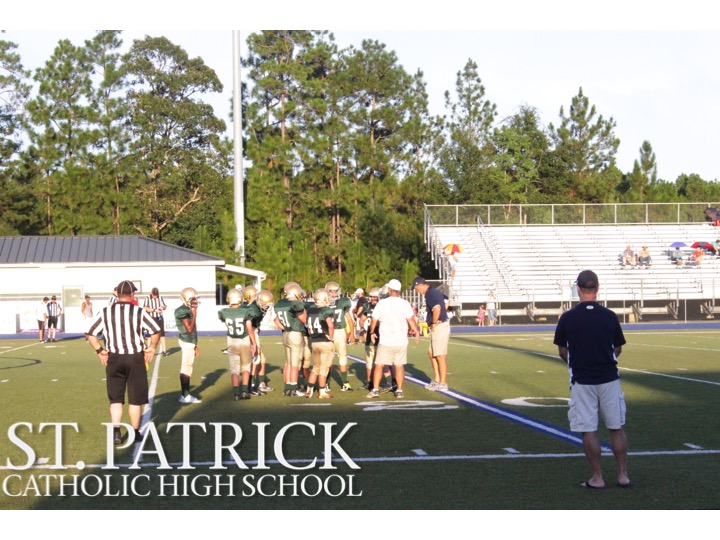 This past Thursday, the Junior High football team won their game against Resurrection. This week they have done it again. The Irish had an awesome win against New Augusta. The score of the game was 36 to 8.   The boys are starting off great this season! This football game was played with integrity and teamwork, while being coached by Doug Peterson.

The boys eat and pray together before each game that they have. After that, they practice and then head back into the field house. Before running on the field, the boys go through a tunnel made by the cheerleaders. The junior high squad practices weekly to make sure they are ready to cheer on the boys each game. The girls are great leaders that give a positive and energetic atmosphere during the game, regardless of what the score may be. The squad gets the crowd excited to cheer on the football team. The crowd also has an impact on the game.   It is great to have so many supporters each game, especially students from school!

The members of the St. Patrick football team each have a role on the team. From playing on the field to being the manager, everyone has an important job. Even the boys on the bench are cheering on their teammates and passing out water. Prayer and effort are significant on and off of the field for this team. These are just as important as the plays and work on the field. Congratulations to the football team for another win!

< Click here to see more photos from the game.

Students are in for a real treat today! Dr. Buckle

Seniors, Grace Belk and Anthony Mattina have been

Congratulations, Jameson Thriffiley on being named

Great job to all of our students who performed at