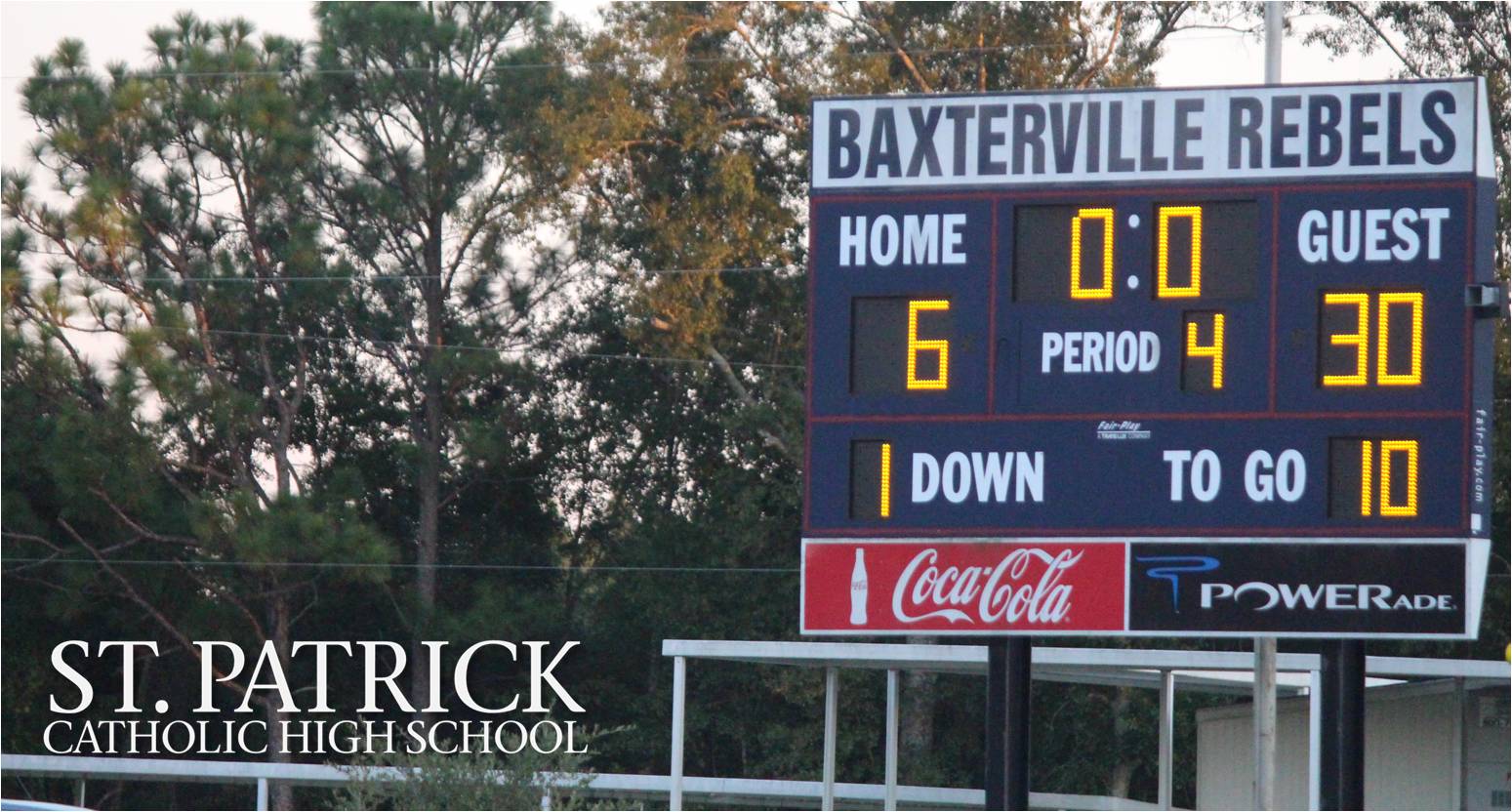 The junior high football team kicked off their season this past Thursday at Baxterville.  The junior high team, coached by Mike Odenwald and Doug Peterson, is made up of twenty-two players from seventh and eighth grade.  This season opener was the first chance for the seventh graders to play at the junior high level.  “It is really nerve racking to see opponents three feet taller than you, but then you start to feel the blood flowing when the game starts,” said seventh grader Graham Dent.

The Fighting Irish began the game with an intimidating defensive stand, forcing a Baxterville three and out.  The Irish offense began their first drive of the season after Baxterville opted to punt.  Running back Craig Farmer ran for 40 yards to get his team inside the red zone and then followed up with a 16 yard touchdown run, giving St. Patrick a 6-0 lead.  The Rebels retaliated with what looked like a 60 yard pass play, but was called back because of a block in the black by a Rebel player.  Ray Frazier, defensive end, ended the first quarter of play in dramatic fashion with an epic sack of the Rebel quarterback.

Jeff McLoughlin of St. Patrick began the second quarter with a fumble of recovery. Soon after, lightning struck twice for the surging Irish offense.  Irish running back Dalton Blackwood broke loose for a long touchdown run, and not long after, Craig Framer picked up his second touchdown of the day.  The Irish were successful in both of their two-point conversion attempts, making the score 22-0 at the end of the first half.

The Irish suffered from some penalties at the beginning of the first half and turned the ball over.  The Rebels did not retain the ball for very long, however, as Ray sacked the quarterback and recovered a fumble.  After Justin Holder, running back, moved the Irish into the red zone, quarterback Tyler Gerretse ran the ball into the end zone.  A few plays later, Tyler also made an amazing interception.  With 12 seconds left in the game, the Rebels were able to salvage their only touchdown before the Irish went to victory formation.

The Irish proved strong in their first game, maintaining the lead for four quarters against the Baxterville Rebels.  Led by eighth graders Ray Frazier and Craig Farmer, the Irish won the game 30-6.  Ray led the defense with two sacks and Craig led the offense with over 100 yards in rushing. After the game, speaking about his team’s success, Ray said, “Starting off the season means so much to me because every one of us worked so hard to get the plays right and to get the stamina to endure the opposing team.”

The junior high football team hopes to continue their fantastic start on Thursday, September 4, against Runnelstown as they play at home.  More pictures from the game are available under the photo gallery tab on the school website.   For more information, contact Coach Mike Odenwald at modenwald@stpatrickhighschool.net.