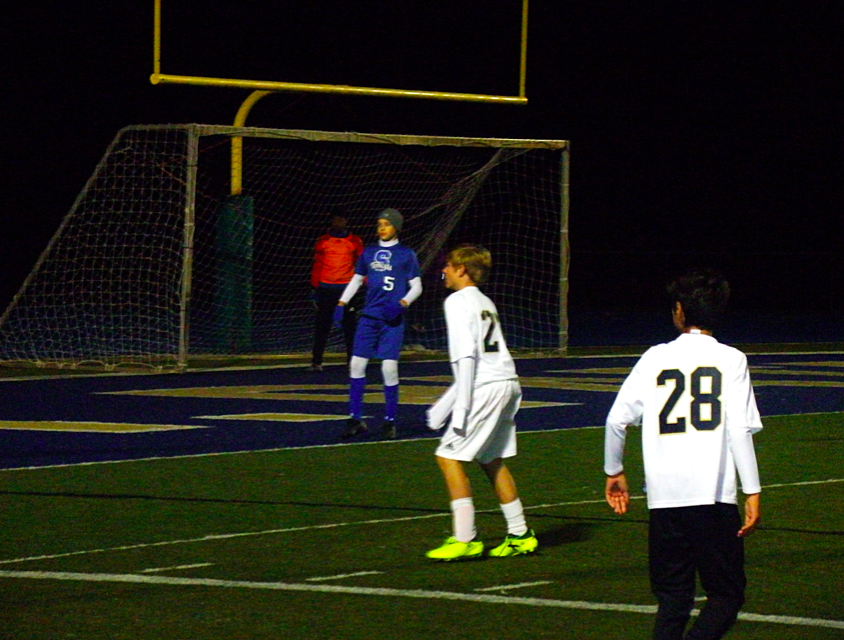 On Thursday, November 15, the Junior High Girls and Boys soccer teams braved the elements to put on an excellent show for St. Patrick fans. The sun had set on the field by 5:30 p.m., and the temperature had dropped to 43 degrees, however it felt much colder. The girls of Stone County High School and St. Patrick stood on the sidelines in huddles, waiting for the game to begin. The heater did little to warm them, and their breath was revealed in white puffs of vapor, a truly enchanting sight. But the game had begun, and it was a chaotic one. The opposing teams battled for an hour in the chilled environment. The Irish were kept on the defense for much of the game, and they fought well, but when the dust settled, they were defeated 0-2. It was a difficult loss for the Irish, who had been pushed to their limits, but they enjoyed every minute of it, as did the fans.

Sophomore Hayden McKay said, “They might have lost, but there is so much talent on the team and so much spirit that they can win, and they will get better.”

The boys game proved to be equally as exciting and marginally more frigid. It was a stark contrast compared to the first, with the Irish mostly on the offense, only at the very end being pushed back to their own half of the field. The abundant Irish players far outnumbered Stone County and many players switched in the game to refresh their exhausted and frozen comrades. Neither side could score for 59 minutes, but in the last minute of the game, the tide turned. Stone County gained control of the ball and went on the offense, brushing Irish aside before scoring a goal, with less than a minute to go in the game. The Irish stood shocked as Stone County rejoiced. It was a significant blow, and the Irish did not score a point before the end of the game. Their next game is November 26 away against Hancock. Come out and support the Irish as they compete for victory.

Images of the games can be viewed below.