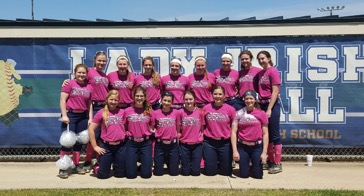 On Saturday, April 9, the Lady Irish hosted their sixth annual Pink day, a tournament that teams from around the coast are invited to attend and wear pink uniforms in honor of breast cancer awareness.  The teams that competed with the Irish this year were Our Lady Academy, McComb, and Long Beach.

The tournament raises money for the Pink Hearts Fund, a non-profit charity that helps women battling cancer.  Before the tournament a ceremony is held where each member of the team picked a person either that they knew or are related to that had been affected by cancer and the team honored those who had lost their battle, those who had won, and those who are still fighting.

Senior, Emma Castanedo, stated; “The Pink game is a great cause because everyone has been touched by cancer in some shape or form.  We are raising awareness, honoring those who have lost their battle, and cheering on those who have won and helping women get the mammograms they need to prevent this terrible disease.  We, as a team, just want to help and have these women know that they are not alone.”

Last year the Lady Irish raised over $2100 to help women who cannot afford to have a mammogram receive one and they are hoping to raise even more this year.

Seventh grader, Emilee Nolte, stated; “The Pink game went really well and the Lady Irish played great in all their games.  I’m proud to be part of a team that is so involved in the community and one this is so willing to reach out as a team and do all they can to make a difference in lives in our community.”

Overall the tournament was a success and the Lady Irish won all of their games, and now have a perfect record of 20-0 after beating McComb.

The Lady Irish are also hosting a skills clinic this Saturday, April 16 at 8 a.m. for kids 12 and under to attend.  Admission is $10 and all the money raised goes to the Pink Heart Fund as well!