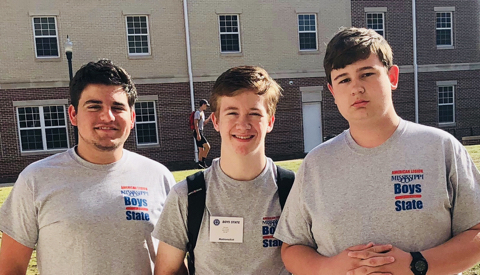 St. Patrick Catholic High School incoming seniors Max Grill, Hayden Miller and Nick Norton recently attended the 2018 summer session of Mississippi American Legion Boys State on the University of Mississippi campus. Boys State is the premiere leadership program for rising high school seniors in Mississippi. Delegates are challenged to not only learn about government, leadership, and service, but attendees are also able to put their knowledge into practice.

Delegates can run for and participate in political office, compete in athletic or academic competitions, take part in legal simulations, and work in broadcast and print journalism. The goal of the program is to learn by doing. All SPCHS students served in top leadership positions: Max was elected to speaker of the house, Nick was elected to serve as the sheriff and was then appointed to be the police commissioner, and Hayden was appointed to serve the governor as chief of staff.