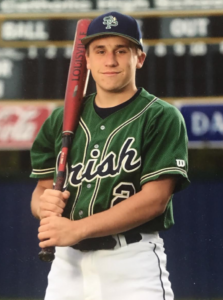 Part of the process to be selected focuses on the nominee’s involvement in their community and their academics. McNew has excelled academically and has been a member of the St. Patrick baseball and soccer programs. He is currently an Eagle Scout nominee. Adversity was one more part of the process. McNew broke his hand 7 games into the 2019 Irish baseball campaign and has battled back to full health.

McNew’s father, Jerry McNew, touched on the season and his son’s development.

“My wife and I couldn’t be any prouder of this accomplishment and the work and dedication he has put into it. The love of Baseball and desire to play even after breaking his hand during a game.  To see someone with the dedication, unlimited potential, and charismatic leadership, in addition to his placing others before himself speaks highly of the character that he has developed.” said Jerry McNew.

Head baseball coach and athletic director, Eddie Burger was high on the junior.

“Nicholas has been an asset to the Fighting Irish baseball program for the last five years. Whether in a starting role or supporting role, his dedication and work ethic to improve all areas of his game is consistent.  It has been a joy to watch Nicholas develop and grow not only as a student-athlete but also as a young man.  Nicholas will thrive in any environment and I anticipate big things for him in the future.” said Burger.

The seminar introduces students who wish to attend undergrad at the Naval Academy to the school life and to get a glimpse of the academic, athletic, and professional training it provides. In 2017, Forbes named the Naval Academy the top ranked public college in the United States. McNew’s selection as a seminar participant serves as the preliminary application to the Naval Academy.

Seminar attendees will be participating in workshops which include the following topics:

​“Saint Patrick has provided the tools of mentoring and setting the examples on and off the field. Coach Burger, Coach Camps, Coach Odenwald, have been tremendous role models providing mentoring since 7th grade. They have demonstrated the examples of leadership in there everyday lives.” said Jerry McNew.

But it wasn’t just the baseball program that Jerry McNew wanted to to thank for helping his son be selected for this seminar.

“The teachers have provided the academic knowledge and welfare needed to succeed at the next level. Mr. Eleuterius and Mrs. Buckley are two of the best teachers he has had. The spiritual development has had an impact on his moral and ethical decision making in building the type of person he is.” said Jerry McNew.