Congratulations to seniors Amelie Million and Windfield Swetman for being selected as 2018 Wendy’s High School Heisman School Winners for St. Patrick Catholic High School! From a total applicant pool of nearly 42,000 high school scholar-athletes graduating with the class of 2019, more than 7,500 have been named School Winners in Wendy’s annual scholarship competition.

A complete list of School Winners can be found here and the program timeline can be accessed here. 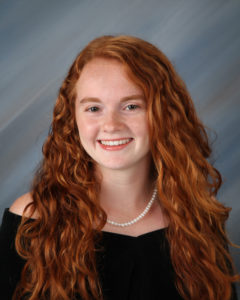 Amelie is the daughter of Mr. Troy Million and Mrs. Odile Million of Ocean Springs, and she is a member of St. Alphonsus Parish. She is a National Merit Semifinalist, she has achieved an ACT score of 35, and she has a score of 1540 on the SAT. She is involved in several extracurricular and athletic activities, including: Student Council (currently serving as Student Body Vice President), Diocese of Biloxi Spirit Mover, National Science Honor Society, Key Club, Interact Club, and she is the Varsity Cross Country/Track Team Captain. Amelie is also a member of the Varsity Soccer Team. She has been part of several state championship-winning teams during her time at St. Patrick.

Amelie is also a servant leader throughout both St. Patrick and Ocean Springs communities, as she has completed more than 250 hours of community service throughout her high school years. She has attended several leadership conferences and workshops including Girls State, USAFA Summer Seminar, Naval Academy Summer Seminar, Coast Guard Academy AIM Program, Mississippi Governor’s School and more. She has received several honors and awards, including: MSASC Outstanding Student Council Member, Earl Wyman Service Award, All-State Cross Country Team member, Citizenship of the Year Award for St. Patrick and Principal’s Honor Roll. She is an active volunteer in her parish as an Altar Server and by assisting with the Catholic Kid’s Camp, offering her insights as a Lego League Mentor, and volunteering for the Edge Program. 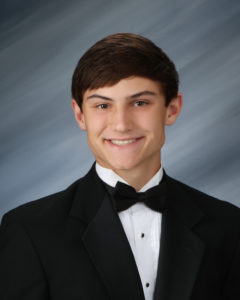 Windfield is the son of Mr. Windy Swetman and Mrs. Jon’elle Swetman of Biloxi, and he is a member of First Baptist Biloxi. Windfield is a National Merit Semifinalist and has achieved an ACT score of 34. He is involved in a variety of extracurricular activities and is an active member of both the St. Patrick and Biloxi communities. Windfield has been a member of Student Council since 2013 and has attended Student Council conferences at the state, regional, and national levels throughout his time with the organization. He is also a member of the Interact Club, the National Honor Society (serving as Vice President), National Science Honor Society, Spanish Honor Society, and National English Honor Society. Windfield has completed more than 100 community service hours since he has been a student at St. Patrick. He founded the Salvation Army Red Kettle project at St. Patrick Catholic High School in 2013. He is also a member of Big Buddies, which is dedicated to connecting the student body.

The Wendy’s High School Heisman was created by Wendy’s founder Dave Thomas in 1994. Dave Thomas dropped out of high school when he was 15 years old in order to work full-time and went on to become one of the most successful entrepreneurs in history. While this nontraditional path led to his prosperity, it always worried Dave that others would follow in his footsteps and expect to achieve similar fame and wealth by not finishing high school or attending college.

Faced with this dilemma, at 61 years old, Dave enrolled at Coconut Creek High School in Ft. Lauderdale, Fla., and received his General Equivalency Diploma (GED). Inspired by this moment and with a desire to celebrate the outstanding achievements of youth in America, he launched the Wendy’s High School Heisman program.

Twenty-five years later, Wendy’s High School Heisman has honored more than 600,000 of the nation’s most esteemed high school seniors who share Wendy’s values of giving back to their communities, treating people with respect, continuing education and excelling on the athletic field.

The Wendy’s High School Heisman is a joint program between Wendy’s and the Heisman Trophy Trust, host and custodians of the Heisman Memorial Trophy®.

Wendy’s® was founded in 1969 by Dave Thomas in Columbus, Ohio. Dave built his business on the premise, “Quality is our Recipe®,” which remains the guidepost of the Wendy’s system. Wendy’s is best known for its made-to-order square hamburgers, using fresh, never frozen beef*, freshly-prepared salads with hand-chopped lettuce, and other signature items like chili, baked potatoes and the Frosty® dessert. The Wendy’s Company is committed to doing the right thing and making a positive difference in the lives of others. This is most visible through the Company’s support of the Dave Thomas Foundation for Adoption® and its signature Wendy’s Wonderful Kids® program, which seeks to find every child in the North American foster care system a loving, forever home. Today, Wendy’s and its franchisees employ hundreds of thousands of people across more than 6,600 restaurants worldwide with a vision of becoming the world’s most thriving and beloved restaurant brand. Please visit www.wendys.com andwww.squaredealblog.com for more information and connect with us on Twitter and Instagram using @wendys, and on Facebook www.facebook.com/wendys.