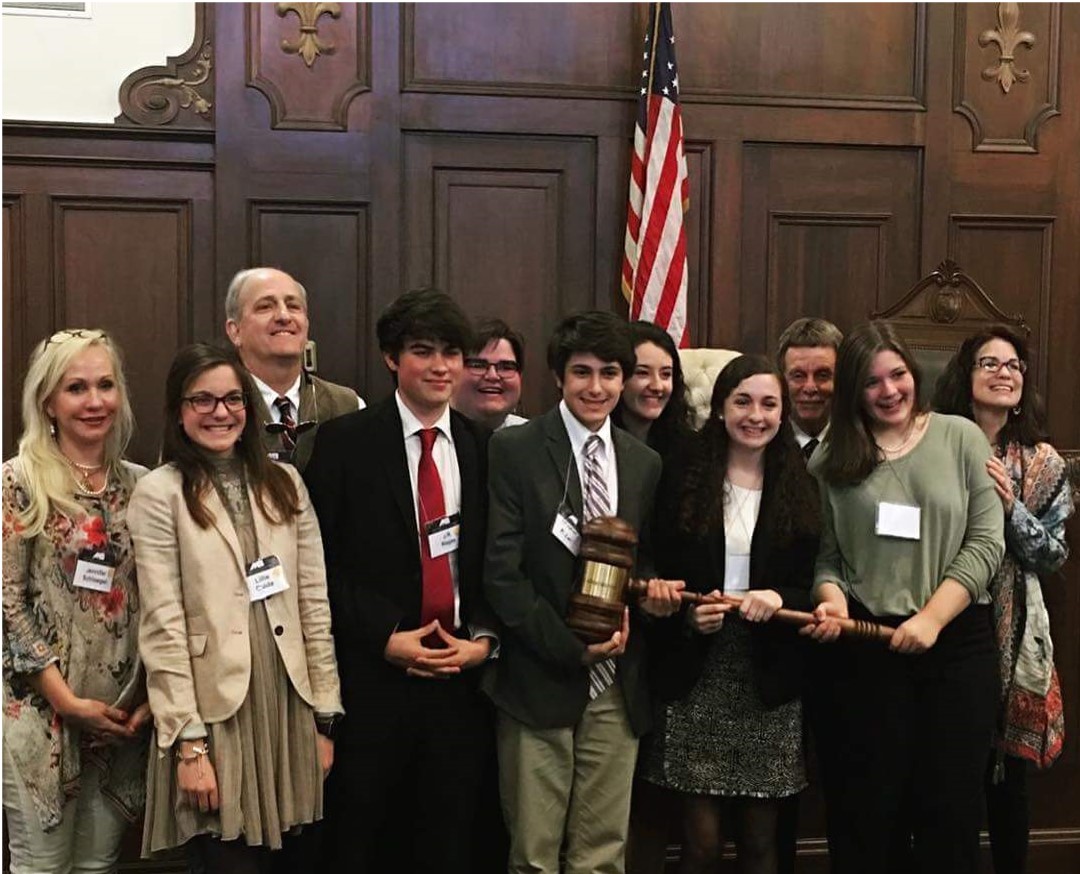 On Thursday night, St. Patrick High School’s mock trial team traveled to Jackson, Mississippi to prepare for the state mock trial competition sponsored by Mississippi Bar’s Young Lawyers.  The first round of competition began on Friday at noon and the fourth and final round ended on Saturday afternoon.  The award ceremony which occurred right after the final round rewarded the team’s hard work as St. Patrick placed in each of the three possible divisions.  Andrew Lechner placed as the fifth most effective witness in the state, J.R. Riojas placed as third most effective attorney in the state, and most impressively, the team placed fifth best team overall.  This is now the second year in a row that the mock trial team coached by Judge Jennifer Schloegel, Ms. Elena Guida, Mr. Jack Perry, and Mr. Orin Eluterius has placed in the top five at the statewide level.

Mock trial begins in the fall when a case is presented to all teams in Mississippi.  Teams then prepare a case for both the prosecution and then the defense of the case.  Next, teams perform each side of their case in two different rounds at the regional level.  A few teams from each regional qualify for state.  There were sixteen teams overall who qualified to compete at the state level.  St. Patrick qualified for state at the gulf coast regional after defeating Biloxi and sustaining a narrow defeat against Presbyterian Christian.

On Friday of the state competition, teams are randomly assigned a side to present as well as a team to go against.  St. Patrick went against Brandon High School and presented the defense.  Because St. Patrick won, they were then matched with another school who had won to compete in the second round.  The second round featured an intense matchup of St. Patrick vs. Mississippi School of Math and Science (MSMS) which was eventually decided by only a few points in the favor of MSMS.  For the two rounds that occurred on Saturday, St. Patrick competed against other one loss teams.  St. Patrick defeated St. Andrews while presenting the side of the prosecution.  That afternoon, St. Patrick faced Lamar in what was an epic display of skill and knowledge.  St. Patrick was able to claim victory by only a single point.  This single point gave St. Patrick the fifth place gavel but was a narrow enough margin that Lamar was still able to secure the sixth and final gavel.

The level of competition at the state competition is quite extreme and takes a lot of preparation and dedication.  After the award ceremony, Mr. Eluterius had this to say, “I am so happy about what everyone achieved.  [Their] hard work and dedication paid off, they are a great group of students and all work so well together.”  The witnesses on this year’s mock trial team were Sofia Cooper, Maia Dooley, and Andrew Lechner.  The attorneys were Stephen Azar, Taylor Smith, and J.R. Riojas. The timekeeper was Lillie Guida.  The dedication of the students was definitely impressive, but just as impressive, if not more so, was the dedication of the coaches.  Ms. Schloegel and Ms. Guida volunteered countless hours to ensure that the team was as prepared as it was and helped to teach the students about the legal system along the way.  Mr. Perry, who has been assisting with mock trial for many years, along with Mr. Eleuterius also donated much of their time towards the preparation of the team.

<Click here to view more photos from the competition.

Although this mock trial season has come to a close, the team has gained great amounts of experience and knowledge and is looking forward to continuing their success next season.