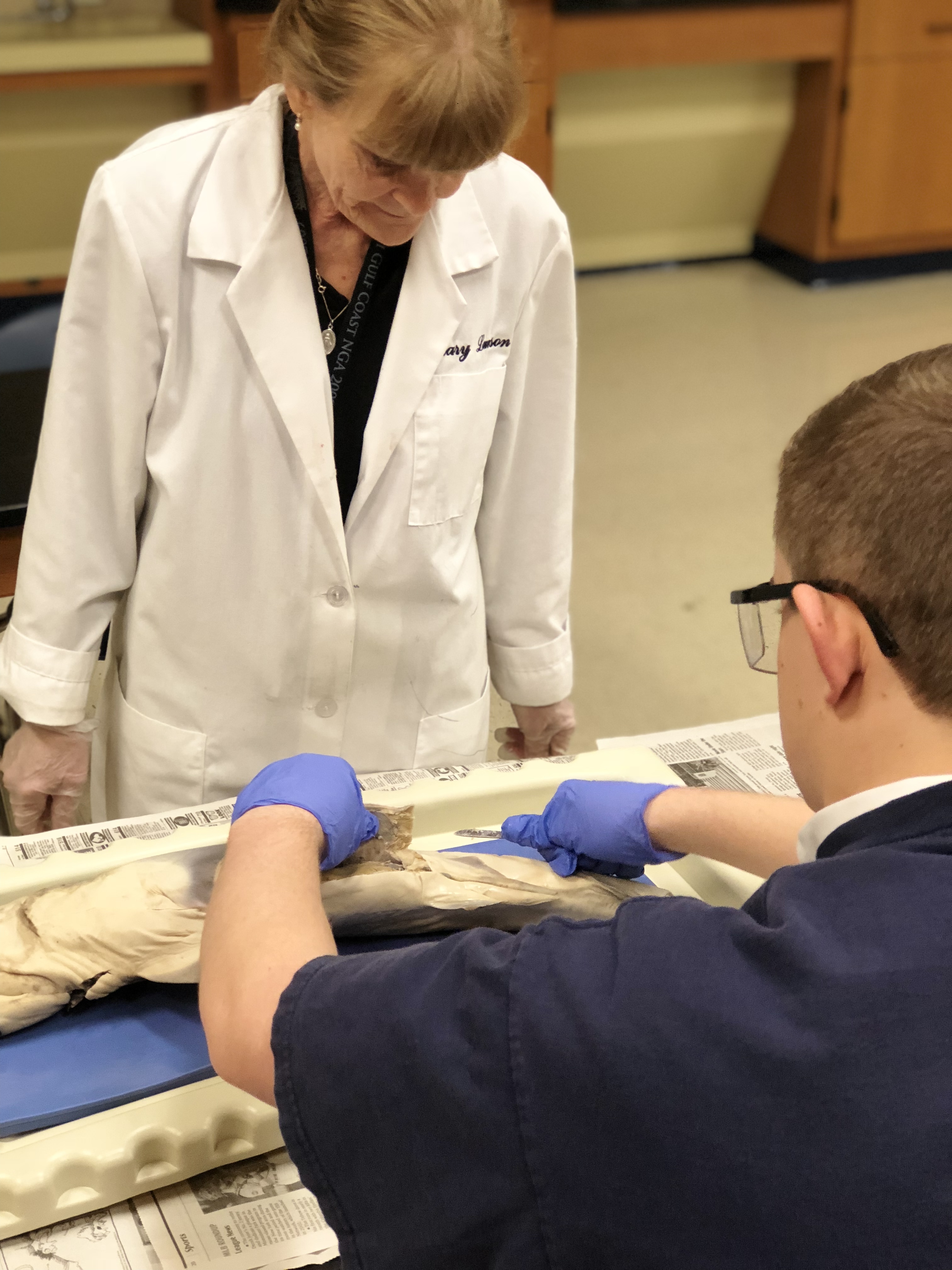 Students in Mrs. Mary Lawson’s Biology II classes have been performing internal and external dissections of the Spiny Dogfish Shark. The spiny dogfish has mildly poisonous spines, one in front of each dorsal fin (removed for the protection of the students). It is a relatively small shark, attaining about 3.5 feet in length and weighing about 15 pounds.

The spiny dogfish is found worldwide, from the temperate to the sub polar regions, from the shallow waters of the seashore to depths of 100 fathoms (600 feet). They are voracious eaters, feeding on fish, crustaceans, squid, gastropods, jellyfish and even red and brown algae. Like most other sharks, the spiny dogfish is omnivorous, eating both plant and animal matter.

Some students in the class are interested in pursuing careers in the medical field. Student Malea Marchioni said, “During the lab, I found everything fascinating! The scales along the shark’s skin and the poisonous spines I felt on the edge of the fin was probably the most interesting because they were both something new I had recently learned about the shark. It was cool to actually experience the things we’d been covering in class. In my opinion, dissections are the most enjoyable part of the class for me.  I find it really intriguing to be able to see that these real animals are a lot more complicated internally and how each one has similar and different characteristics.”

She added, “After I graduate high school, as of right now, I am planning on going into the medical field, but I have not made my official field choice yet. I have a few different options I have been interested in and have not been able to number it down to one.”

The species is abundant and is famous for its disruptive activities to fishing operations on this side of the Atlantic. Except as laboratory specimens, no economic use has been found for them. Tagging studies indicate that the animal has a life span of 25-30 years. In the lab, they serve two purposes: as dissection specimens, illustrating many primitive vertebrae features, useful in tracing these features through the higher vertebrates to man. Their muscles and internal organs are clearly visible. Secondly, their relatively small size is a convenience in housing and caring for live specimens in a broad range of research situations, such as human cardiology and immunology. Some students found embryos in the female specimens.

Student Alaina Olsen said, “What I found most interesting was how curious my classmates were and how willing they were to jump right into the lab. I, on the other hand, was a little less up to the task, which is okay considering a job in the medical field is not my first choice. I plan to be an architect like my dad. I’ve done pretty well in labs in the past, but Mrs. Lawson’s warnings of the smell mixed with the reality was a little too much for me. Learning about how different a shark’s body systems are from those of a human’s was pretty cool, though!”

“The Spiny Dogfish Shark dissection, like the other dissections we do in Biology II, is a big part of our Comparative Anatomy studies in second semester. Comparative anatomy involves comparing and contrasting the anatomy and physiology of animals of different phyla in the animal kingdom with each other as well as with that of humans. We compare body systems of the animals, i.e. how the animal digests, reproduces, breathes, excretes, etc. The Spiny Dogfish Shark is the shark sent by labs used in high school and college settings, and the animal is a favorite of our students,” said Teacher Mary Lawson.