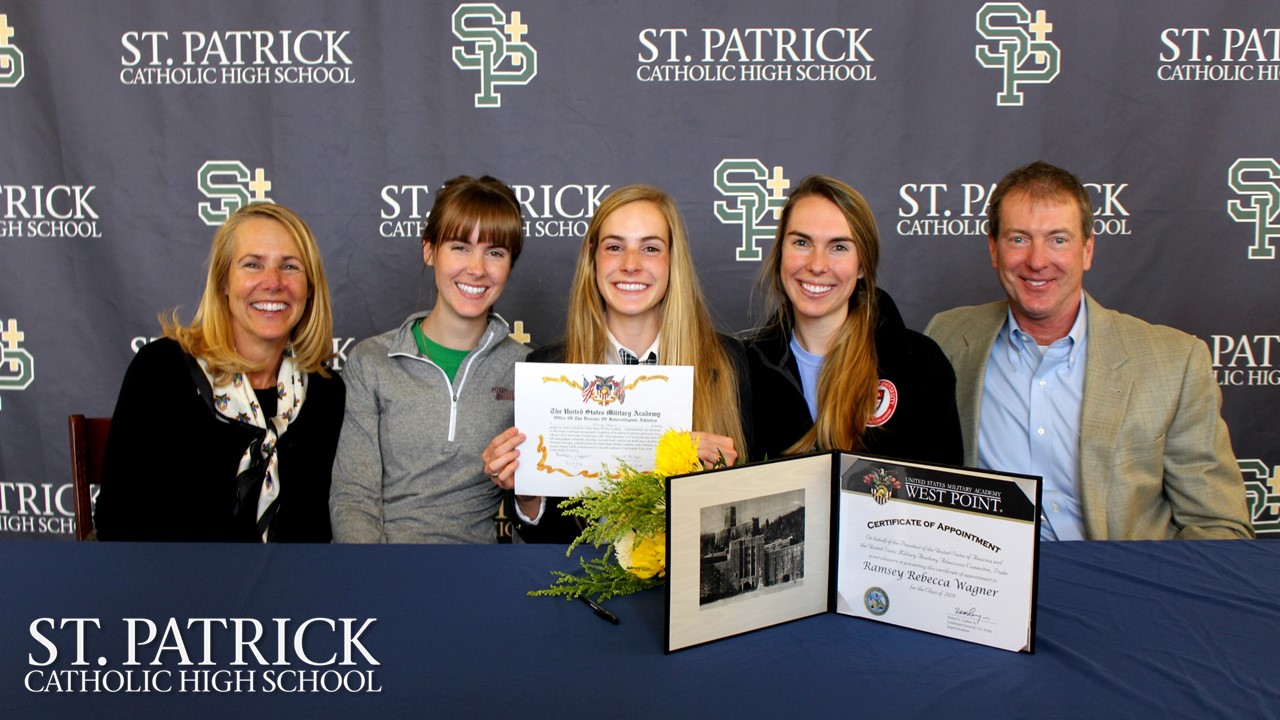 Ramsey Rebecca Wagner, daughter of Clay Wagner and Kathy Wagner, signed her commitment to attending the United States Military Academy West Point on February 19.  She will attend West Point in the fall as a cadet in the United States Military. Admission rates to West Point are less than ten percent of those who apply.  The signing and presenting of Wagner’s certificate of appointment took place in the St. Patrick Catholic High School library Friday afternoon.

Wagner entered the library to merited applause.  The room was full of Wagner’s family, friends, coaches, teammates, teachers, and journalists.  They were all there to celebrate the outstanding accomplishment of Wagner and her promising future.

Upon entering the room, Wagner hugged her parents.  She then sat to give a speech thanking those who have supported her.  Wagner said, “I have so much to be thankful for. I’d like to start off by thanking God for all the many gifts He has blessed me with.”  She continued by thanking St. Patrick, St. Sebastian, and Our Lady Queen of Victory for their intercessions.  When Wagner began to thank her twin sister, Hannah Wagner, her tears began to flow.  Ramsey asked Hannah to finish reading the speech.

Wagner’s speech went on to say, “I thank my mom for all the time and energy she has invested in this sport and in my life.  I thank my dad for cheering me on throughout the races and catching me at the end.”  She also thanked the cross country team parents, Coach Tim, Coach Mironovich, Coach Dellenger, Nolan Halliburton, family, friends, St. Patrick faculty and staff, Senator Cochran, Congressman Palazzo, West Point, Colonel Zimmerman, and Captain Gage.

Wagner has touched the lives of many in the St. Patrick and Mississippi Gulf Coast communities, and now it is time for her to touch the lives of the rest of the world.  Congratulations Ramsey Wagner, and thank you for being such a positive figure at St. Patrick!