Reeves ’22 Interns at The Capitol for Congressman

Reeves ’22 Interns at The Capitol for Congressman 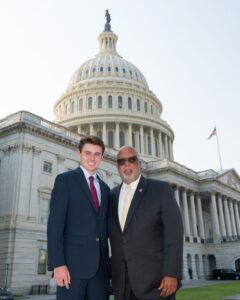 BILOXI- James Cole Reeves ’22 spent two weeks in Washington, D.C. over the summer interning for Congressman Bennie Thompson. Reeves was the first intern in Thompson’s office since the start of the global pandemic.

“It was a very informal process,” Reeves said. “I sent in my letter and a resume requesting a summer internship. With the pandemic, I did not think it would actually pan out the way it did.”

During his time in Washington, D.C., Reeves had an array of duties including answering phones, writing and mailing formal letters, escorting guests through security and running errands.

“In D.C., everything is connected by underground tunnels. I thought it was cool how I would run errands two blocks away and never step outside.”

Reeves had the opportunity to write summaries for different bills for the Congressman to read over. Reeves was also able to attend several congressional meetings and strategy sessions for select committee meetings.

“It was a great overall experience. The legislative process is a lot more complex than people think, so I was able to learn more about that.”

Congressman Thompson has been the U.S. Representative for Mississippi’s 2nd Congressional District since 1993 and is the longest-serving African-American elected official in the state. Since 2019, the Congressman has served as the chair of the Committee on Homeland Security.

“I really enjoyed how personable the Congressman was,” Reeves continues. “I was able to attend several working lunch meetings where I got to get to know him well.”

“All of us at St. Patrick are extremely proud of Cole for his experience and achievement,” Principal Dr. Matt Buckley said. “It was a wonderful learning experience. We remain grateful to Congressman Thompson for providing this opportunity.”