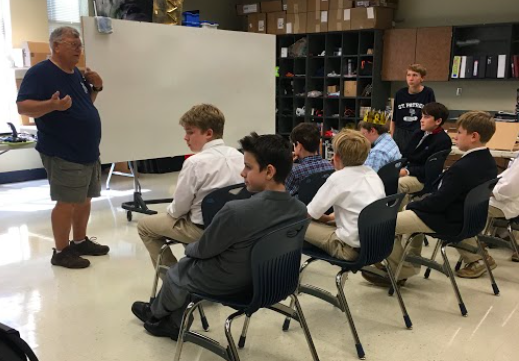 On September 13, St. Patrick’s Robotics Club met to share ideas on how to create a robot that would win this year’s FTC challenge. Students that are a part of the Club will compete in “Rover Ruckus” in 2019. The team has 10 weeks to design and build a robot that complies with all the requirements and can successfully defeat other teams across the nation in the qualifying season, which takes place in January.

At this particular meeting, the main focus was to get an idea of the structure for the robot the team was going to build. Everyone participated by sharing what he/she believed would be a good idea. The team discussed how it was going to comply to the requirements set by FIRST. Students considered different options for creating a functional robot such as the mechanism for picking up and/or dropping objects. Also discussed was the fact that the robot has a height limit but needs to be high enough off the ground so as to not get stuck on “craters” as they are called in the games. Students gave their opinions on what material the robot and all of its functional pieces should be made out of as well. Diagrams of this year’s game setup was drawn and discussed at this meeting.

Members of the Robotics Team meet usually twice a week to discuss the upcoming challenge and to practice “driving” the robot. New members are always welcome so come join in the fun!