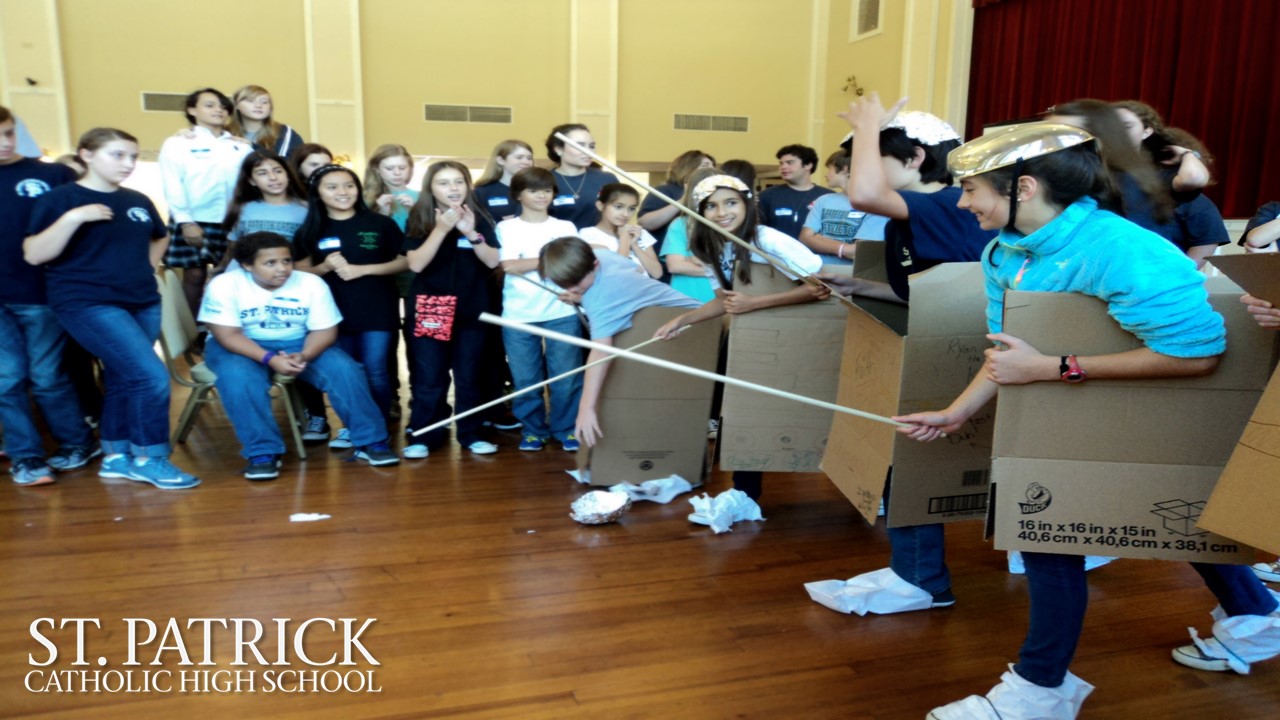 On Wednesday, October 7, St. Patrick Catholic High School seventh graders gathered at the Nativity Sacred Heart Center behind Nativity of the Blessed Virgin Mary Cathedral in Biloxi.  The eighty-seven students were there to participate in a retreat given by the Campus Ministry Team for the seventh grade.  Ms. Previto, Mr. Creel, Ms. Moon, Ms. Gryder, and Mr. Hawkins supervised the retreat.

The Campus Ministry Team has spent the last three weeks planning a retreat that will bring the seventh graders closer to God.  This year the team decided to shake things up by changing the location of the retreat.  Instead of taking place at St. James in Gulfport, the seventh grade retreat took place at Nativity Sacred Heart Center in Biloxi, and the rest of the school retreats throughout the year will also take place there.

The day continued with four sections of talks and activities.  The talks were about spiritual wounds, spiritual strength, spiritual armor, and spiritual sacrifice.  Some of the activities included were ships and sailors, human knot, and two-finger lift.  One special activity had each group create a set of armor out of cardboard, tin foil, and paper bags.  Then a seventh grader was picked from each group to wear his or her group’s armor and race each other.  The winner was Quinlan Pisciotta who as winner was knighted by Chet Rodrigue in the name of St. Patrick Catholic High School.

The day concluded with Father Dennis Carver exposing the Blessed Sacrament for adoration at Nativity of the Blessed Virgin Mary Cathedral.  There was live music performed by two Campus Ministry Team members while other members prayed individually with seventh graders.  Adoration was the perfect ending to the retreat.

As the seventh graders were taken back to school the Campus Ministry Team then began return the Nativity Sacred Heart Center back to its orderly form.  Now the team is planning the eighth grade retreat that will take place on Wednesday, November 11, at the same location.  If the success of the seventh grade retreat is anything to go by then the rest of the retreats will be fresh and reinvigorating.