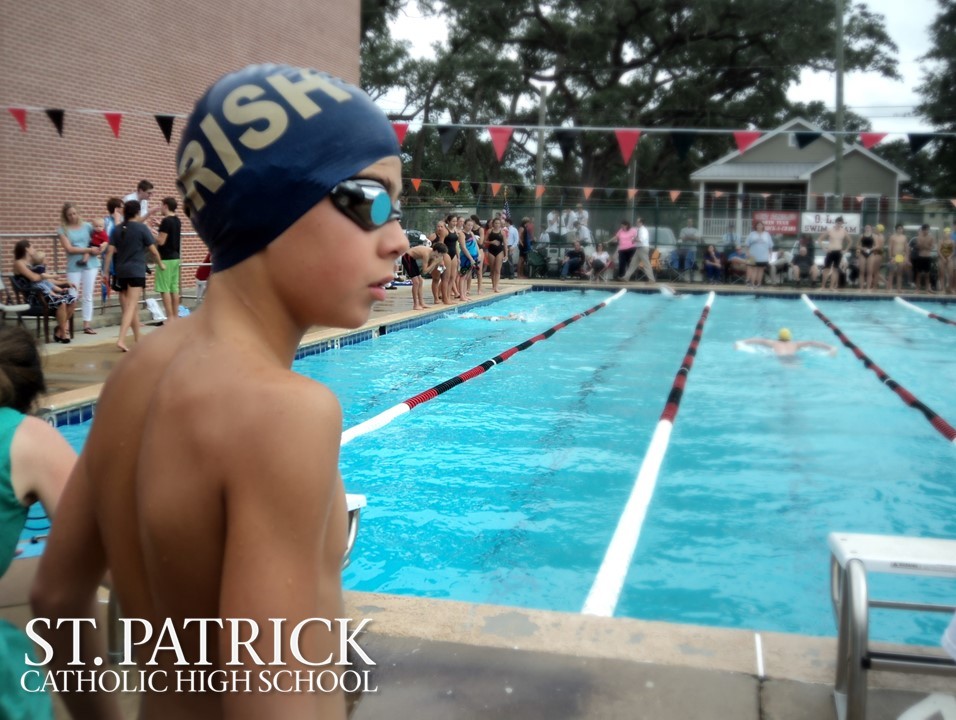 St. Patrick Catholic High School swim team is comprised of thirty-four team members, seventeen boys and seventeen girls, from seventh through twelfth grade.  The team is coached by Beth McMackin.  Nearly all thirty-four swim team members were at St. Stanislaus College to compete in the swim meet.  Each competing member was there to give it their all.

Almost as impressive as the team’s swimming was the team’s support for one another.  When a member was swimming the rest of the team could be seen and heard cheering him or her to victory.  With every bob of an Irish swim cap above water cheers from around the pool could be heard getting louder and louder.  Even though the swim meet was held in Bay St. Louis, many of the team members’ families and a few St. Patrick students not on the swim team came to the meet to show their Fighting Irish pride.

The St. Patrick swim team definitely has Fighting Irish pride.  They were all happy to be competing in the swim meet.  Jeanne Torp, St. Patrick junior, said, “Everyone worked really hard and put in their best effort.”  Jeanne Torp’s effort put her more than a lap ahead of her competitors in the 200 Individual Medley.  Jeanne Torp was not the only one that did well, in fact, all of the swim team members competed well.  When asked for his swimming motto, St. Patrick seventh grader, Vincent Pisciotta, said, “Don’t give up!”

By not giving up the St. Patrick boys’ and girls’ swim teams won second place at the swim meet.  St. Stanislaus College and Our Lady Academy won first, and D’Iberville High School came in third.

The swim team practices every day after school from 4:00 to 5:30 at the Biloxi Natatorium.  All of their practice builds up to swim meets, and the practice definitely does not go to waste.  The meet on Wednesday, September 2, was the third meet of the 2015 swim season, but it certainly was not the last.  The next swim meet will be held on Wednesday, September 9, from 5:00 to 6:00 at Biloxi Natatorium.