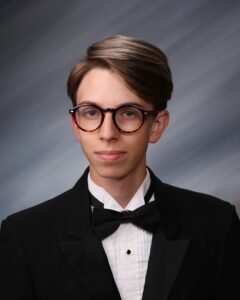 St. Patrick Catholic High School’s Sawyer Stone ’21 has received appointments from The United States Military Academy at West Point and the United States Air Force Academy. While being accepted into one of these storied institutions calls for celebration, it is exceptionally rare to be accepted into two.

Both military academies are extremely selective. West Point has a 12% acceptance rate while the Air Force Academy only has an 11% acceptance rate. Both require high ACT scores of 25-33. Stone earned a 32 on the ACT.

“It is a huge honor to be accepted,” Stone says. “I have wanted to attend a military institution since sophomore year.”

“My plan is to go into some sort of economics and work with budgeting. I gained an interest in math my senior year and I feel like I have a talent for it,” said Stone.

Stone also says he has an interest in cross commissioning into the newly established United States Space Force.

“With it being a newer branch it is a very unique opportunity. I am interested in being at the forefront of its development,” said Stone.

Stone is no stranger to the military. Both of his parents are retired colonels. His father retired as a psychologist and his mother was a squadron commander. Stone’s father, Jay Stone, also attended the United States Air Force Academy.

Stone is not the only St. Patrick student to be accepted into a military academy in recent years. Amelie Million ’19 attends the United States Naval Academy and Ramsey Wagner ’16 attended the United States Military Academy at West Point.

St. Patrick is proud of the nominations and appointments of our graduates to our nation’s military academies. These schools represent some of the most rigorous curriculum in the United States with both institutions ranked in the 2021 Top 30 of U.S. News and World Reports list of National Liberal Arts Colleges.

Principal Dr. Matt Buckley says he could not be more proud and impressed to have a student with two appointments to service academies.

“On behalf of our administration, faculty, and staff, we are extremely proud of Sawyer for receiving appointments from the United States Military Academy at West Point and the United States Air Force Academy,” said Dr. Buckley.

“What an honor this is for St. Patrick High School, and this is truly a testament to Sawyer’s hard work and dedication.  I know that he will continue to make all of us Fighting Irish proud!”