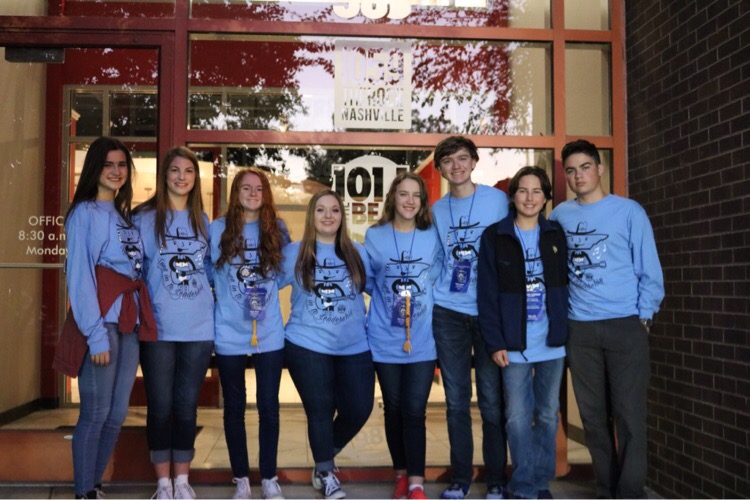 For the last few days, our talented Student Council members have been developing their leadership skills at the Southern Association of Student Councils Conference in Nashville, Tennessee.  The conference lasted for three days and was filled with entertainment, learning, and awards for the members that attended.  Eight of our student council members attended the conference, and they all returned to school with new experience and ideas to bring to St. Patrick Catholic High School’s Student Council.

The representatives from St. Patrick Catholic High School included Shannon Kirkpatrick, Amelie Million, Natallie Noel, Diego Riojas, JR Riojas, Richard Springer, and Mary Tubb. Since the start of the conference on Saturday, October 15, until the closing, the group traveled from one unique activity to the next.  The conference featured some incredible speakers and also informational student workshops on multiple subjects associated with leadership and helping the members’ respective schools.

The council was also able to have some fun in this staple city of the south, making use of the amenities Nashville provides.  There were some larger events at the conference unique to the musical city of Nashville including a candle lighting and concert that featured three local country artists.  The group of young leaders was also able to explore this special city; they walked around downtown Nashville and were able to visit the Country Music Hall of Fame.

Shannon Kirkpatrick shared her favorite part of the trip, “My favorite part of the conference were the keynote speakers and exploring around the downtown Nashville area with my council.”  Richard Springer also chimed in expressing his wonder and appreciation for the trip, “SASC this year was awesome.  We heard some really great speakers and met some incredible people. This was an amazing trip, and I can’t thank Mr. and Mrs. Buckley enough for the opportunity.”  The Student Council can’t wait to see what SASC has in store for them next year!