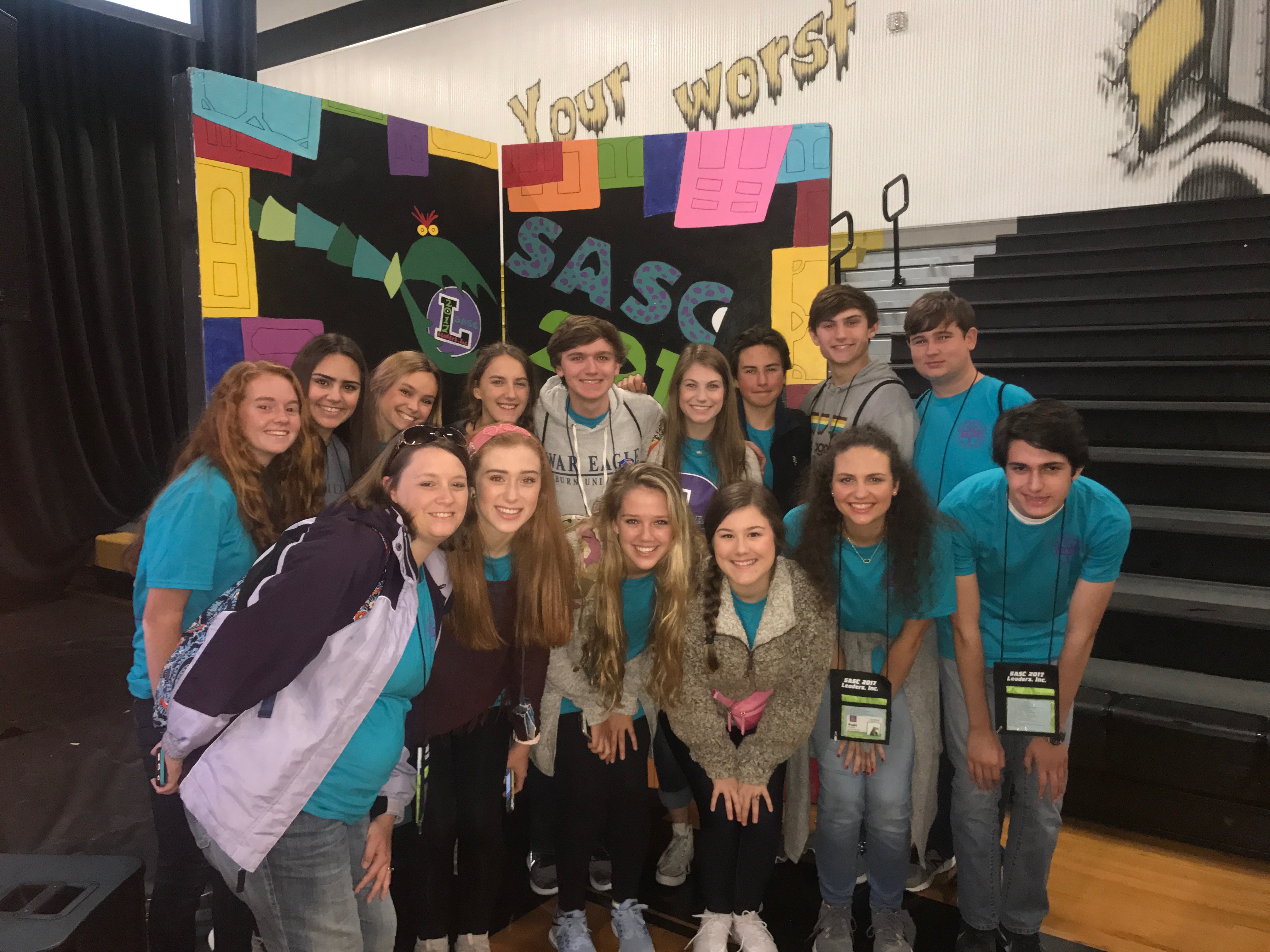 On the evening of Friday, October 27, after halftime, 14 students, Coach Burger, and Easton, Adalyn, Mr. and Mrs. Buckley set out for Orlando, Florida, for the 2017 Southern Association of Student Councils Conference.

The 85th-annual conference took place at Ocoee High School in Orlando, FL, with the theme “Leaders, Inc.,” based on the Disney movie Monsters, Inc. The main idea of the conference was that true leadership can be achieved with an active imagination.

Although the group missed the Friday events of the conference due to Senior Night, they took part in the majority of workshops and seminars which occurred on Saturday and Sunday. On Saturday, they participated in a community service activity, engaged with other student leaders during swap shops, and listened to keynote speaker Mike Smith. As the Founder for THE BAY, one of the few non-profit skateparks in the country, Mike works with young people from all walks of life, encouraging them to pursue their passions and live out their dreams.

Shannon Kirkpatrick, a senior and Student Council Vice President, listened to a seminar by Melissa Walsh, a girl who was paralyzed at the age of 18 after she drank and drove. “Her story really opened my eyes,” said Kirkpatrick, “about how dangerous drinking and driving can be and how she is a living miracle from God.”

On Sunday, the group woke up bright and early to attend mass at Holy Family Catholic Church in Orlando, FL, where they were welcomed as honored guests by Fr. John C. Giel, V.G. After mass and breakfast, they took part in the last day of the conference. During the awards ceremony, Richard Springer won second-place in the Photography Contest. Also, Mrs. Buckley was awarded the prestigious honor of SASC Advisor of the Year. She was nominated by the student delegates and competed against teachers from schools in all 15 states in the SASC region. To read more about her award, click here.

The group then boarded buses for SeaWorld, where they rode several roller coasters and learned about a wide variety of sea life. That night, the entire conference participated in the candle lighting ceremony, a tradition at the annual SASC Conference, during which delegates reflect on their time at the conference and spread the light of leadership. The group then traveled to Disney Springs for dinner. On Monday, they spent the day at Universal Studios. They traveled home on Tuesday.

Windfield Swetman, a junior Student Council member, attended the SASC Conference for the second time, first attending in Houma, LA, in 2015. “I enjoyed the great experience I had at SASC,” he said. “The conference gave me the opportunity to listen to inspiring and moving guest speakers such as Kyle Scheele, Mike Smith, and Laymon Hicks. It also helped me grow my leadership skills and allowed me to learn from other student leaders.”

Senior Student Council member Anna D’Aquilla experienced her first SASC Conference. “I was a little nervous going in,” she said. “But it ended up being a really fun experience, during which I was able to meet new people and learn a lot about leadership, myself, and my fellow STUCO members.”

For Kirkpatrick, who has attended three SASC Conferences, this year’s was bittersweet. “I’ve learned so much throughout the years,” she said. “My last one was great, and the skills I’ve learned from previous conferences are things I’m sure to take with me for the rest of my life.”

The St. Patrick Student Council members who attended the 2017 SASC Conference took away lessons of leadership that they will apply in order to better their school, community, state, and beyond. They wish to congratulate Mrs. Buckley again on her outstanding award and hope to pass down the importance of attending conferences like this to the future student leaders of St. Patrick.

Photos from this event can be found here.

⭐The deadline to order an ad for our Winter Spor