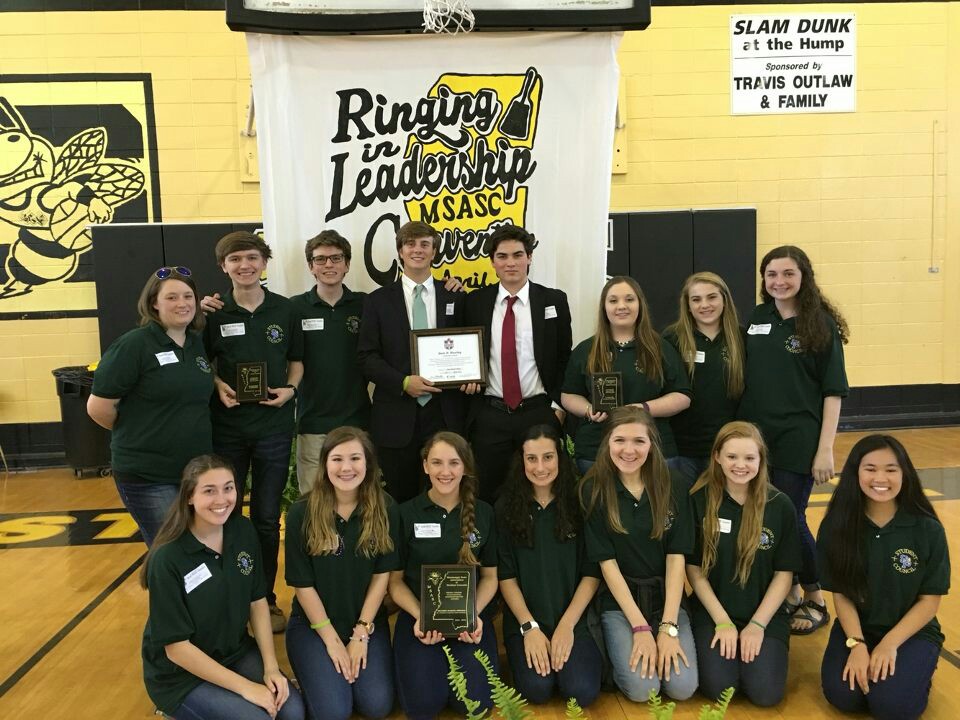 It was an early four o’clock in the morning on Saturday as fourteen half-asleep student council members and Mrs. Buckley boarded a fifteen-person bus bound for Starkville.  The bus drove more than four hours so the student council members could attend the fourty-sixth annual Mississippi Association of Student Councils (MSASC) State Convention.  They were not going to Starkville to only attend this convention, however, they were also aspiring to win the state office of treasurer in the hope to host the fourty-seventh MSASC State Convention at St. Patrick.

It was not long after arrival that the student council members were awakened from their tired daze. The convention’s theme was “ringing in leadership” and the host school, Starkville High School, had prepared a cow bell wake up routine that guaranteed no one would still be asleep.  Next, the keynote speaker, Jasmine Murray, was introduced.  Murray is an incredible individual from Columbus, Mississippi.  Among many other accomplishments, Murray was crowned Miss Mississippi in 2014 and placed in the top ten for the 2015 Miss America competition.  She shared her message of dreaming big and not giving up after failing.  She gave the example of it taking her three tries to win Miss Mississippi.  After speaking, Murray treated the crowd as she sang a beautiful rendition of Christina Aguilera’s “Beautiful.”  It is no surprise she has a wonderful voice as she placed in the Top 13 on American Idol’s eighth season.

Upon arrival at the convention, the student council from St. Patrick donated their stuffed animals they had collected in the previous weeks to the statewide teddy bear charity project.  The turnout of teddy bears from councils across the state was overwhelming.  Immediately following this, the students from St. Patrick began their campaign for treasurer by building connections with many different leaders from all over Mississippi.  Later during the convention, Luke Seicshnaydre and J.R. Riojas presented a partner speech for the campaign.  After lunch, it was announced that St. Patrick did indeed win the election and is set to host next year’s convention.  Richard Springer accepted the position and will act as the ambassador from St. Patrick in next year’s MSASC advisory council meetings.  Meanwhile, Matthew Bisner formally invited all of the audience to attend the fourty-seventh annual MSASC State Convention.

The St. Patrick student council has had a very successful year under the direction of Mrs. Buckley and accordingly won many awards at the award ceremony.  Richard Springer was named Most Outstanding Student Council Member of the Year, Mr. Matt Buckley was named Most Outstanding Administrator of the Year, and the council’s project, “Welcome to St. Patrick Week,” was named Best Project of the Year.  Mrs. Buckley was elected as one of three student council advisors to the MSASC advisory council, and Mr. Buckley was elected to be one of two administrators to the MSASC advisory council.

< Click here to see more pictures from the conference.