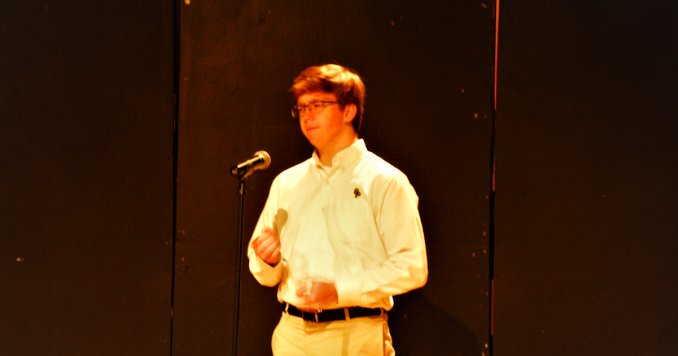 On October 23, the class winners of the Poetry Out Loud Competition gathered in the auditorium to present their poems to a panel of judges. These judges determine the best student to move on to the state competition. The auditorium silence is only broken by the clapping that follows each performance, as students skillfully recite their chosen poems. Senior David Alexander began the competition, followed by 13 students who have spent hours refining their knowledge of their poem and their recitation skills.

Mastery of tone and mood are necessary to recite a poem at the quality demanded by the judges. After admirable performances by all contestants, the judges reviewed the top scorers. The students are graded on several different factors including physical presence, voice and articulation, dramatic appropriateness, evidence of understanding, and overall performance. The student’s accuracy also plays a large part in the scoring.

Once a student is chosen to move on to state levels, they must win in three separate rounds of state competition, with a new poem recited at each round. If the student or students win state, they move onto nationals where the process is repeated to select a national champion. The opportunities provided by this prestigious program go far beyond monetary prizes. Former champions and even runner ups are more seriously considered by higher level colleges for their performance at such a high level.

Performer Macayla Wells stated, “Being selected to recite my poem in the school competition gave me a newfound confidence. I was able to gain a better understanding of learning poetry as I made it one with my own emotions. To participate in such an esteemed competition has been an honor and privilege. Everyone who participated did an amazing job, and I am very proud of my fellow students who also had confidence in their recitations.”

It most certainly takes confidence to perform in front of a panel of judges, but perhaps even more so in front of fellow peers. In any case, the talent and preparation of the students clearly demonstrates that they are all willing to move onto a higher level of competition. It is up to the judges as to who is selected for that honor.