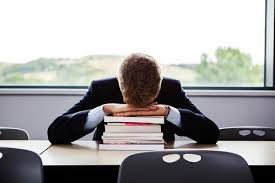 Set Goals: Setting goals has been proven by many studies to be an effective way of successful studying.  For instance, a research group from Harvard proved goals increase motivation which in turn increases study productivity.  If goal-setting is to be utilized to its full potential, however, students need to ensure they are properly setting goals.  First, goals need to be reasonable and have a point.  If a student attempts to set an unrealistic goal like memorizing four entire chapters of a book word for word, the results will be counterproductive as the brain literally gets overloaded.  Furthermore, if a student aims to fully understand a concept of chapter seven when the next test is only on chapter three, the goal will obviously be useless.  Next, the student must decide a way of measuring the completion of a goal.  If there is no way for a student to know if he or she actually understands a concept, the student could go in to a test thinking he or she knows more than he or she actually does.  Finally, it is good to have a reward after successfully accomplishing a series of goals.  For example, if Bill fulfills his goal to understand the differences between the types of pronouns, he could reward himself with a candy bar or a five-minute dance break.

Avoid Cramming: Everyone at one point in the education journey will experience the stress of having to study at the last minute for a test.  As appealing as procrastinating is to many high school and college students is, scientists have proven it to not only to be stressful and unhealthy, but they have also proven it to have adverse effects.  These adverse effects are especially prominent when lack of sleep is involved as was described by a study done by UCLA.  This study explains how when there is studying late into the night, students actually do worse.  A healthy solution is to have a daily routine in which students review their class notes at a certain point every day.  This certain study time is suggested to be right after school or right after practice if the student is involved in athletics or extracurricular.  Even if this study time is only for one half of an hour, studies show that it is much easier for a brain to process the information in these small chunks as opposed to cramming into the night before. Organization is key to ensuring success in this study idea.  It is important to know what concepts are expected to be understood by when so the student has ample time to spread out the learning of such concepts.

Learn to Teach to Learn: As odd as it may sound, researchers have shown that students who learn information as if they are going to teach about it score much higher on tests than students who learn information as if they are going to test on it. This does not necessarily mean the student has to actually present the information as if they are teaching it to know it better, rather it means that by being able to verbalize understanding, the knowledge is solidified.  When preparing her AP Calculus students for a verbal quiz on limits and continuity Mrs. Tavel said, “All I want you to do is to be able to have a conversation with me.” Having conversations with teachers and peers who understand material a student is struggling with will help the student understand what they do not understand.  This is not a piece of cake, but with a little bit of patience, this technique of learning how to talk about concepts will greatly benefit students on their testing.