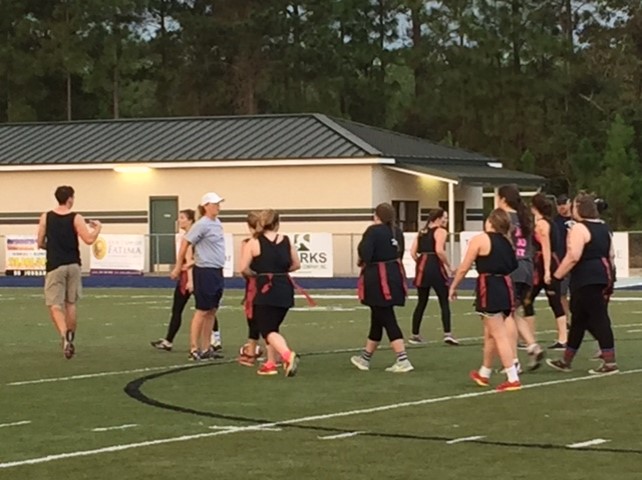 On Wednesday, the junior and senior girls faced off in an epic powder puff football game.  Any girl in the junior and senior grades were allowed to sign up in the month leading into homecoming week. The male students in these grades were allowed to sign up to be either cheerleaders or coaches.  The two teams had several practices to prepare for the showdown, and flag football rules are used in playing the game. Coach Burger, Coach Hawkins, and Coach Jefferies were the referees for the game.

Going into the game, the senior girls were the reigning champions and were ready to play a strong game.  The game proved to be a grueling matchup of tough defenses.  Each defense started the game by forcing a three-and-out on the first four possessions of the ball game.  The junior girls started out with the ball and had the last chance of the first half.  For the final play of the first half, the juniors coaches called a trick play  where quarterback Morgan McCrea put wide receiver Julia Roberts in motion and tossed it to her on the reverse.  Julia then threw the ball twenty yards to connect with Olivia Allen who was running a vertical.  After picking up a few yards after the catch, Olivia’s flag was pulled by the speedy senior secondary.  This play which was the first first-down for the juniors ended the first half.

Defenses continued to be strong in the second half.  Baylee Hodge of the junior team and Emma Castanedo of the senior team each made fantastic grabs for interceptions.  It looked like the juniors were going to get something going on offense when Laurie Pisciotta made a great catch for seven yards.  Two plays later, senior defender Rachel Steinwinder stopped the junior drive when she batted down a pass intended for Anna Clare Colson. Although the senior offense led by Elizabeth Zorich was able to gain a few more yards in the second half than they did in the first half, neither team was able to score in regulation and the game went into overtime.  Each team would have the chance to score starting at their opponents’ ten-yard line.

The senior coaches Beaux Bethea and Quinn Frommeyer decided to try a different strategy. After the game Beaux would say, “That was the best and most exciting game I have ever coached in.” The strategy was to try to stuff the ball up the middle. The seniors would continue to pick up seven yards on the first two downs of powerful run plays, but on third down and three, Olivia Allen of the juniors recovered a fumble to give the juniors possession.  The juniors were not able to get anything done on their first three downs of their final possession.  On the final play, however, quarter back Morgan McCrea connected with Julia Roberts on the fade route for ten yards and a touchdown.  This play game the juniors the 6-0 victory over the seniors.  When asked for comments on the game, the entire junior class replied “just did it” referring to their t-shirts and class theme which is “just do 17.”  This game was by far one of the most thrilling, hard-fought, games in powder puff football history.