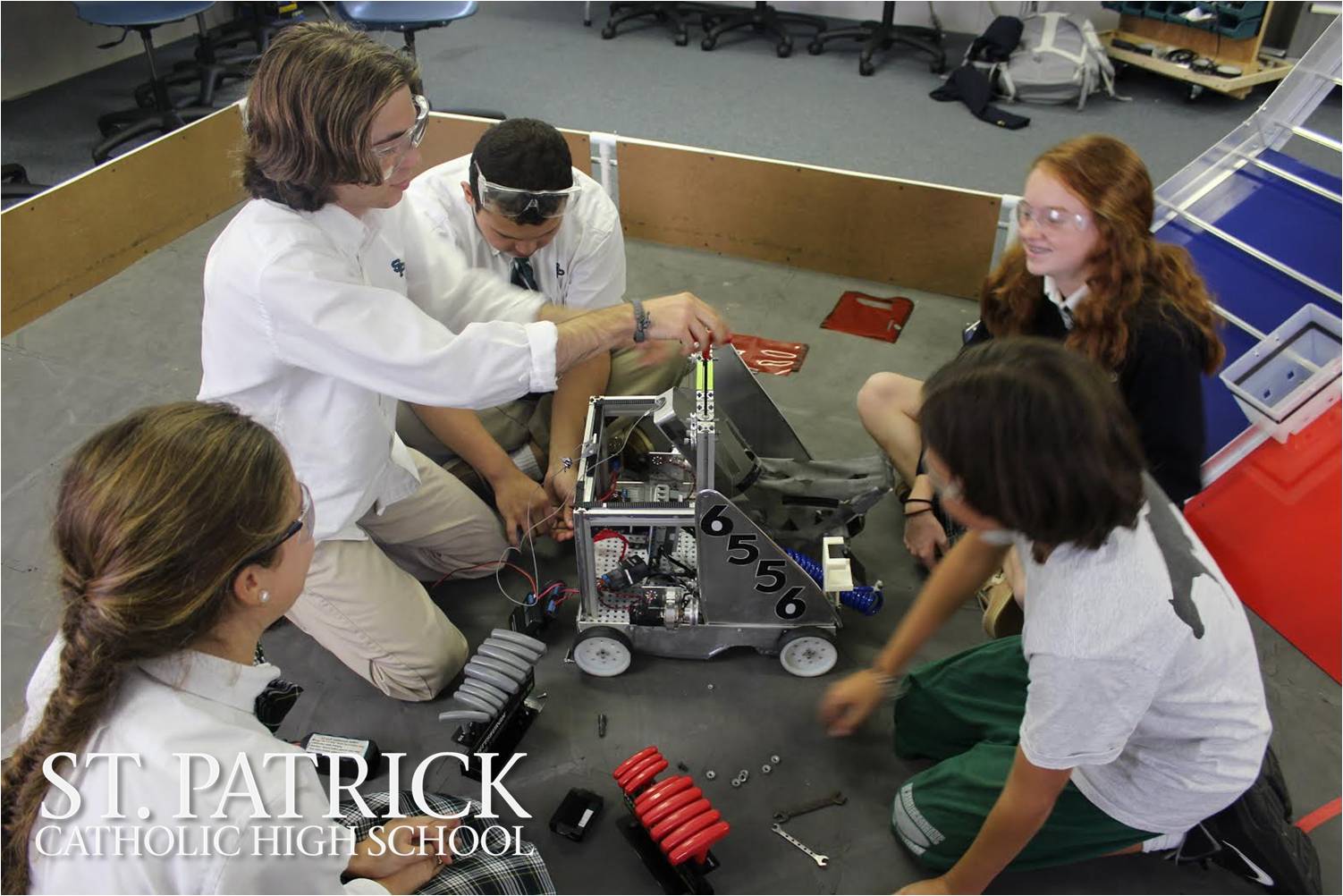 On August 29, 2005, Mercy Cross High School in Biloxi, Miss. was set to have its inaugural FIRST Robotics Competition team meeting, a meeting that both the students and Mentors greatly anticipated as robotics was new at the school. Unfortunately, Mother Nature had something else in mind for the Gulf Coast, and unleashed Hurricane Katrina, the costliest natural disaster, as well as one of the five deadliest hurricanes, in our nation’s history. Katrina wreaked havoc on Gulf communities, including Biloxi, and destroyed much of the team’s community, including their school.

In the days following the storm, original mentor and science teacher, Debbie Worrel, looked for ways to put off starting the new team, but the students were very adamant about moving forward. But how could they? They had no school, no supplies, and no internet. The students’ unwavering desire pushed three adults to side with them and the team rallied.

Many of these students had no homes and had lost everything. In one day, their world had changed dramatically. Any comfort zone they had was gone. In looking back to that time, Debbie remembers being told to try and give the students “normalcy.” She admits to almost resenting that term, given all that everyone had lost. Thinking back now, this was what the students really needed. Overcoming the hardship of a loss as catastrophic as that caused by Katrina was done by finding a routine and a motivation to create something new. The students were motivated and never stopped. The team worked in some pretty horrific places, but the students never flinched. “The hardships [of Katrina] didn’t stop any of them. They just wouldn’t stop learning and we couldn’t stop teaching. The kids were an inspiration to all of us,” Debbie says of that time. While the team learned a lot, both about robotics and about themselves, they had no way to keep up with the day-to-day information and did not fully engage and compete until the 2006 season.

In 2007, Mercy Cross High School merged with others in the area and a new school under the name of St. Patrick Catholic High School was built. The team, aptly named “Tempest,” is still going strong and the FIRST Tech Challenge program has also been introduced at the school. The team also hosts different events for the elementary schools in the area and has an outreach program in which they teach elementary school students about emergency evacuations.

Because Biloxi has no corporate engineers, the students have had to learn programming, animation, and CAD. Debbie is still one of the two original Mentors who continue to support the team, buying tutorials and books to help the students succeed. Through perseverance, the students learned on their own and to this day, the older students teach the younger students so that when they graduate, they have knowledge of each level.

While buildings and lives have been rebuilt some 10 years post Katrina, the students of St. Patrick’s and Debbie Worrel still work in very, very poor circumstances. But Debbie says it doesn’t matter because the students continue to be an inspiration every day.

Over the years, the team has been recognized in some way at every event they attend. The awards come back to the school, but the students bring much more with them. Debbie admits proudly that she has seen her students grasp their future careers, go on to college, and are now becoming engineers and architects, and are finding a way of life that really began by bringing FIRST to the school. She believes that being part of FIRST gave the students confidence, and team-building and leadership skills way above any other program. “FIRST is probably the best run organization I have been associated with and I have taught for 38 years,” she says. “The program is excellent and we have grown now to do all levels of FIRST.”

Debbie continues to be fully committed to the team. She teaches 145 students during the day and is committed to the FIRST teams after school, on weekends, holidays, and nights. She admits that it is very hard and that the students feel the pressure, too, because their school encourages participation in clubs, sports, and parish activities.

Unlike some, Debbie does not get a stipend and sometimes finds it difficult to watch other teams that have corporate engineers, large budgets, and other support. As a Catholic, tuition-based school, the team is limited to just two fundraisers per year, which means they better do it right the first time. So, yes, there are struggles. But you won’t hear her complain. Despite the limited timeframe, they get the job done. She thinks that brings more benefit to the students.

Three years ago, St. Patrick’s had 24 seniors in their robotics program. All 24 went on to college in a STEM field and in that year, the students in the robotics program received $10 million in scholarship offers. Debbie is astounded to see these results. Despite the long hours and very limited support, she knows that what the students take with them is what is truly important.

Debbie’s own children are grown and married and she hopes that one day her grandchildren will be part of St. Patrick’s FIRST program. Seeing her students, not only graduating with STEM education offers but fulfilling their dreams as engineers in science-related jobs, makes it all worthwhile. “I see it on their faces when they succeed and the first time that robot moves,” she says. “We, as a team, have overcome many obstacles. Every time I feel like I can’t go any more, they make me realize how much they succeed and I, too, keep moving forward.”

The full newsletter can be downloaded here.